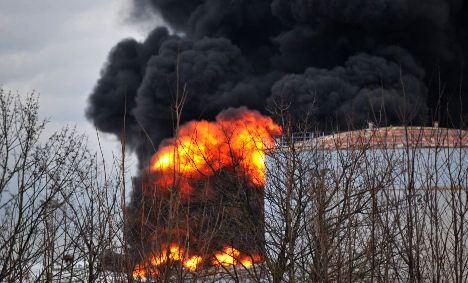 Smoke could be seen rising from kilometres away. Photo: DPA
Shell came under fire from environmentalists Friends of the Earth Germany (BUND) which accused the oil giant of underplaying the danger of the fumes.
To say that the fumes posed no threat to residents was an "outrageous playing down" of the dangers, Paul Kröfges of BUND's North Rhine-Westphalia chapter wrote in a statement.
On the contrary, he said the explosion had created "masses of carcinogenic soot" along with other carcinogenic gasses, "which are being distributed together with the soot in the air over southern Cologne."
The cause of the explosion was still unclear on Friday morning, the Welt newspaper reported. All that is known is that a tank containing toluene, a solvent, caught fire at the Rheinland refinery in the Godorf district of the city of Cologne at around 3pm local time on Thursday, according to a Shell statement.
"We will be investigating the cause and bringing in outside experts," refinery manager Wulf Spitzley told the paper. City authorities said in a statement that the blaze had been brought under control within 90 minutes. "As far as we know no one was injured by the explosion," they added.
So far there has also been no estimate of the cost of the damage.
Later on Thursday evening, authorities revised earlier warnings to residents to stay indoors with the windows and doors closed after establishing the smoke from the fire was not dangerous, the paper said.
However, some local residents complained that they had not been told early enough about the potential risk.
"We only heard from the press hours later that we were supposed to close windows and doors," Giuseppe Falsone, who lives just 150 metres from the refinery, told the paper. "If poisonous smoke is rising, it's not too much to get staff to go and inform the residents."
"Initial information was only available from announcements on the radio," criticized Kröfges. "These were limited to the usual warnings to close windows and doors. This breakdown is clearly inherent to the system, as soon as an emergency occurs, direct communication collapses into chaos."
READ MORE: Man sets fire to his flat after girlfriend dumps him