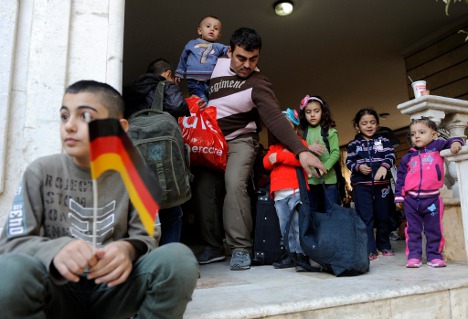 Thousands of Syrian refugees have been taken in by Germany. Photo: DPA

Before civil war broke out, Odday Alatiki was top of his class in Daraa, southern Syria and was planning to study at university in Damascus.

But he was forced to leave his home at the centre of protests against the regime of President Bashar al-Assad. He fled to Zaatari, a camp for 100,000 Syrian refugees in Jordan.

There he met Detlef Gürtler, a Swiss journalist, who visited the camp last November and heard Odday’s story.

Gürtler came up with the idea of funding Odday’s passage to Germany through crowdfunding and set up an online site where donors can pledge money towards Odday’s fees to study IT in Clausthal-Zellerfeld, Lower Saxony. He reached his target of €8,000 on Wednesday and on Thursday the total stood at around €12,000. Gürtler told The Local: "If you watch the news or Youtube videos on Syria, you get a feeling of helplessness – your first reaction is to do something, but you realize you can't.

“Giving one Syrian the chance to study in Germany means that you can do something. That's what has driven us to start the crowdfunding, and that's obviously what has driven a lot of people to support the campaign.”

The Technical University in Clausthal has given Odday a conditional offer, but says he must give proof of sound finances. On January 21st he has an appointment at the German embassy in Beirut to collect a student visa.

In a video on crowd-funding site Indiegogo, the teenager said: “I want to study in Germany therefore I need your help.”

Although the future of Syria remains uncertain, Gürtler is hoping that the initiative will give one young Syrian a chance of success. "I don't want to predict the future life of a 20-year-old Syrian student in Germany. But there are choices and perspectives – that's more than he could possibly get in the refugee camp or in Syria."

While Gürtler has been campaigning for Odday to come to Germany, the International Organization for Migration (IOM) has arranged for 160 more Syrian refugees to resettle in Germany.

Their sixth charter flight left Lebanon on Tuesday and landed in Kassel, Hesse. It included 49 children and two people with disabilities.

The new arrivals follow 643 other refugees who have already been flown to Germany by IOM since the launch of the programme in September 2013.

The initiative, part of the German government’s Humanitarian Admissions Programme (HAP), is expected to run until June 2014 as Germany takes in thousands of refugees from the war-torn country.

Syria’s problems are also attracting attention in Germany as young men fly out to the Middle East to fight President Assad’s forces.

In December a 16-year-old boy from Frankfurt was killed after apparently being recruited by Salafists from his school.

The case is not unique. In November a former German youth footballer was killed after joining the Syrian conflict.

And last October Germany's domestic spy chief Hans-Georg Maaßen estimated the number of German fighters in Syria had reached 170 and said 50 had travelled in recent months.

Now authorities are pushing for an early warning system to tackle Salafist recruitment of schoolchildren.

The problem appears particularly acute in the state of Hesse, where extremists are thought to have been distributing German-language Korans to initiate contact with Muslim pupils, the Welt newspaper reported.