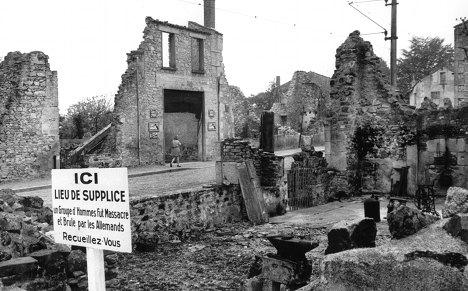 The ruins of Oradour-sur-Glane have been preserved to remember the atrocity. Photo: DPA

The suspect, who was not identified, is believed to have belonged to an armoured division of the SS that attacked Oradour-sur-Glane and wiped out nearly all its inhabitants, an act of retribution ordered over the purported kidnapping of a commander.

"The prosecutor's office in Dortmund has charged an 88-year-old pensioner from Cologne over the murder of 25 people committed by a group, and with aiding and abetting the murder of several hundred people," the regional court of Cologne said in a statement.
SS troops massacred 642 people in the tiny village in western France on June 10th, 1944 during World War II, in an atrocity that deeply scarred the
French nation.
"The prosecutor's office accuses the suspect of causing, along with other members of his company, the deaths of 25 men," said the statement.
It said the accused would have until the end of March to raise any objections to the case going to trial.
Dortmund state prosecutor Andreas Brendel said the accused, who was 19 at the time of the slaughter and among six men still facing possible prosecution, denies the charges.
"He acknowledged he was in Oradour-sur-Glane at the time and a member of the SS but disputes any involvement in the murders," Brendel told AFP.
The male victims were mowed down with machine guns in a barn, with any survivors shot at close range with pistols before the barn was set ablaze.
Prosecutors charge that the accused then went to the village church where several hundred women and children were being held prisoner.
Members of the unit used explosives, automatic weapons and hand grenades to kill many of them, then set the church on fire.
"The suspect is accused of abetting the murder by either assuming blockade and surveillance duties within sight of the church or carrying flammable material to the church," it said.
Among the 642 victims in the village were 254 women and 207 children.
CLICK HERE for photos of Oradour-sur-Glane The prosecutor's office recalled that the case had been reopened nearly 70 years later based on a review of earlier investigations by German prosecutors.
The presidents of Germany and France travelled to the village last September and joined hands with a survivor in a historic moment of reconciliation.
The village has been a ghost town ever since the atrocity, deliberately preserved in its ravaged state as a memorial to those who died on one of the darkest days of World War II.
During his visit, President Joachim Gauck was at pains to reassure France, which bears deep scars from the Nazis' crimes, that Germany is a changed country.
"The Germany that I have the honour of representing is a different Germany from the one that haunts their memories," he said.
Germany in 2010 reopened a war crimes case into the attack when a historian discovered documents implicating six suspects in their 80s.
Prosecutors eventually identified 12 members of the regiment who were still alive after trawling through files of the Stasi secret police in the former communist east that came to light after German reunification in 1990.
Probes have been opened against seven of them. The other five have already served sentences in France.