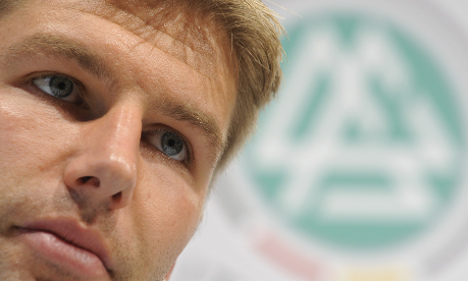 Hitzlsperger, who earned more than 50 caps for Germany before retiring in September due to a knee injury, said in an interview with newspaper Die Zeit, for which he writes a column, that his awareness of being gay was "a long and difficult process".

"It is only in recent years I have come to realize I preferred living with a man," he said.

And Hitzlsperger, nicknamed "the hammer" in his playing days, said he had decided to speak out to spark a public debate about homosexuality among professional sportsmen.

“The subject remains stuck in clichés,” he said. “Professional sportsmen appear perfect ‘disciplined’, ‘hard’, ‘manly’. Homosexuals on the other hand are seen as ‘bitchy’, ‘soft’, ‘sensitive’.”

“Homosexuality and masculinity are not contradictory,” he said.

He added: “What has annoyed me is that those who know least about the subject speak the most about it.”

Hitzlsperger also said his retirement prompted the decision to reveal he was gay as it meant he now had time for the “commitment”.

“The Olympic Games in Sochi are approaching and I think it needs critical voices who will speak out against the campaigns run by several governments against homosexuals,” he said.

The former Aston Villa player described how growing up in rural Catholic Bavaria meant homosexuality was seen as “unnatural” and he only became aware of his homosexuality when he grew up.

He lived with his girlfriend for several years and said they were happy together. The ex-Stuttgart player planned to marry but the relationship ended after eight years six years ago “without his partner knowing about his feelings for men”.

“Why should I be ashamed? I was never ashamed of the way I am,” he said in the interview, adding he had not lied about his sexuality; rather that he had kept it quiet.

When his girlfriend moved out he lived alone, but the only comments that sparked from his teammates was why he had not found someone new.

Both men responded “positively”, he said.

The revelations have prompted lots of praise for Hitzlesperger on Twitter.

The 31-year-old midfielder, who started his career at Bayern Munich before heading to the English Premier League to join Aston Villa in 2000, was widely praised for his decision to come out.

Chancellor Angela Merkel's spokesman said: "We live in a country where no-one should be afraid to state their sexuality for fear of intolerance.

Merkel said in September 2012 that gay footballers should “have nothing to fear”, but the German football establishment has been far less encouraging.

In September last year goalkeeping legend Oliver Kahn warned gay footballers in Germany to keep their sexuality a secret, while in July the German Football Association (DFB) told gay players to come out – but quietly.

A pamphlet from the DFB German football association advised gay players to wait until the end of the season.

German striker Mario Gomez has also said homosexual players should not be afraid to declare their sexuality, but his former teammate at Bayern Munich Philipp Lahm and national team captain has advised against it, saying they would be “exposed to abusive elements”.

Hitzlsperger's revelation comes on the same day as a French TV channel is due to broadcast an interview with Brazilian player Alex, in which he claims "God created Adam and Eve, not Adam and Yves.