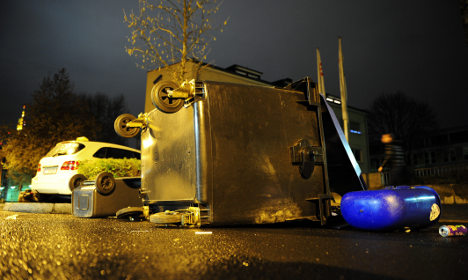 An angry crowd gathered outside the SPD HQ in Frankfurt on Monday night. Photo: DPA

Police said they were baffled as to the motive for Monday evening's attack in Germany’s financial capital in which a crowd of around 150 demonstrators smashed windows of the SPD city headquarters and those of a nearby job centre.

Nobody was injured and no arrests have so far been made as a result of the spontaneous demo, wrote the Frankfurter Allgemeine Zeitung (FAZ) on Tuesday.

The attack, which is the third to hit the party building in the past three months, came just hours after warnings from Germany's highest police body that December’s riots in Hamburg and attacks on police officers could set off a nationwide wave of far-left violence.

Police believe potentially violent “solidarity” actions by hardcore far-left activists could be on the rise after Hamburg, according to an internal Federal Criminal Police paper seen by Der Spiegel magazine on Monday.

The paper warns officers to assume “as before” a tendency towards violence, even life-threatening attacks against policemen by far-left activists.

The Frankfurt group gathered at 7pm in the city centre and walked through the streets setting off bangers, smashing bottles on the street and turning over garbage bins, before heading to the SPD building, police told the FAZ.

Last year, the SPD building's windows were smashed by unknown vandals. And in a separate incident in autumn 2013 it was briefly occupied by demonstrators protesting against the situation for refugees on the Italian island of Lampedusa.

Authorities have introduced a restricted zone in Hamburg there after attacks on officers on December 12th, 20th and 28th. It also follows a demo on December 21st which turned violent.

Yet the SPD in Frankfurt, also home to the European Central Bank and Germany's Occupy movement, rejected any connection between Monday's incident and the Hamburg unrest.  "We don't see any political connection," regional SPD chief whip Karlheinz Pfaff told the FAZ.