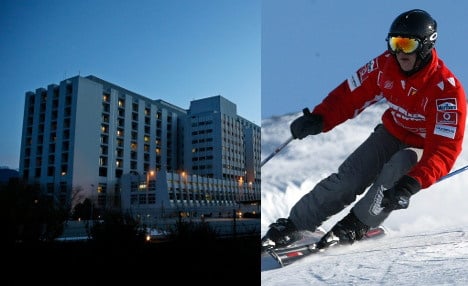 Michael Schumacher remains in intensive care in Grenoble. Photo: DPA
Schumacher has been in a medically induced coma since the accident on December 29th.  He remains in a stable but critical condition, the hospital in the city of Grenoble where he is being treated said on Monday.
And investigators are focusing on the retired racer's speed when he fell and slammed his head on a rock on a small off-piste section of the Meribel ski resort, prompting his evacuation by helicopter to Grenoble.
Prosecutors are also looking at whether the limits of the ski runs next to the accident site were correctly marked and whether the rock in question was lying close enough to the piste to require some kind of protection or signage.
They are also examining whether the safety releases on Schumacher's skis operated properly in a probe aimed at determining responsibility for the accident.
In the most recent update on Schumacher's health, his spokeswoman said on Saturday that the Formula One legend remained in a "critical but stable" condition.

Schumacher was skiing at no faster than 20 kilometres an hour when he had the accident, a witness who captured the motor racing legend on video told Der Spiegel magazine.

A 35-year-old airline steward said that he was filming his girlfriend with a smartphone at the Meribel ski area last Sunday when he captured Swiss resident Schumacher in the un-groomed area where he ran into a rock.

“He came slowly,” the man who was vacationing at the time told the publication.

“He was skiing at 20 kilometres an hour no more.”

The man said he made his video available to authorities and would be available to testify, Der Spiegel reported on Saturday.

Schumacher, who owns an estate overlooking Lake Geneva in the town of Gland in the canton of Vauid, hit a rock while skiing at Meribel on December 29th in circumstances that remain unclear.

On Saturday, the Formula One great remained in critical condition in a Grenoble hospital, according to authorities, who said his condition had neither worsened nor improved.

AFP reported on Friday that authorities were examining a camera that was attached to Schumacher’s helmet as part of an investigation into what happened.

CHU, the university hospital of Grenoble, earlier stated that Schumacher was skiing at high speed in an off-piste area between a beginner’s slope and one for intermediate skiers.

But this information was contested by Sabine Kehm, a spokesman for Schumacher, who said he was not going fast because he had helped a friend who had just fallen in the off-piste area.

According to German newspaper Bild, the person helped was the daughter of one of Schumacher’s friends who fell in the zone between the two slopes.

Hundreds of fans stood outside the Grenoble hospital on Friday to mark the 45th birthday of the retired Ferrari driver who won more Formula One titles than any other racer in career from 1991 to 2012.