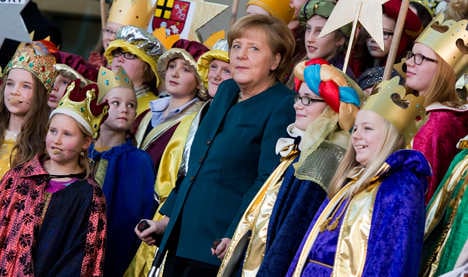 Smiling broadly and looking relaxed, the 59-year-old chancellor, dressed in a smart teal jacket and dark trousers, negotiated a few steps to stand, leaning on her two crutches, among the 100 or so youngsters from across Germany.

The annual event at the chancellery, in which youngsters don "Three Wise Men" costumes and sing carols as part of an Epiphany fundraising effort for needy children, is one of only a couple of appointments that Merkel will keep this week.

CLICK HERE for pictures of Merkel at the service

After a fall over the Christmas holidays while cross-country skiing in Switzerland, Merkel suffered a fractured pelvis and has been advised by doctors to remain lying down as much as possible for three weeks, her spokesman revealed Monday.

She will work mainly from home while she recovers, he said.

Merkel is however also due to lead the first cabinet meeting of 2014 of her hard-won, new "grand coalition" Wednesday, but a scheduled foreign trip and meetings with the Polish and Luxembourg prime ministers later this week have been called off.

Merkel, who was re-elected chancellor for a third term by deputies in December following September's elections, sang along while a girl wearing a costume crown and cloak held the words and music for her to follow.

The German leader referred to the fact that she cannot stand too well due to her injury and is supposed to lie down more as she spoke to the youngsters, whose fundraising will go towards helping refugee children around the world.