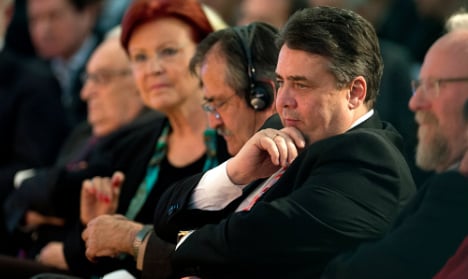 Restrictions that barred residents from EU's two poorest states looking for jobs in some of its wealthiest members expired on January 1st, sparking fears by some of mass invasion and so-called "benefits tourism".

Britain, where hundreds of thousands of immigrants have settled since the European Union first expanded into eastern Europe in 2004, in December rushed through legislation restricting EU migrants from claiming unemployment handouts.

Germany, Europe's economic powerhouse where the minimum wage is about five times what it is in Romania and Bulgaria, is now also considering steps it could take.

Days before the government of conservative Chancellor Angela Merkel is due to examine possible measures to make benefits abuse more difficult, Vice Chancellor Sigmar Gabriel called for a debate on the issue.

"I think it's not necessary to exaggerate this issue. But it shouldn't be minimised either," he said in an interview with the Bild newspaper on Saturday.

Gabriel and Merkel agreed in talks on Friday on the need for tougher measures against those abusing the country's generous welfare system.

"We don't need all-out discrimination of the Bulgarians and Romanians, but nor should we ignore the problems some big German cities face with the immigration of poor people," Gabriel said.

"Next Wednesday the government will objectively tackle this issue during the first ministerial meeting of the year," he said.

Bulgaria and Romania joined the EU in 2007, becoming the bloc's poorest members.

Wary of large numbers of jobseekers arriving from the two countries, several nations kept their job markets closed to Romanian and Bulgarian citizens for several years.

The last of these restrictions expired on January 1st, including in some of the bloc's wealthiest nations — Austria, Belgium, Britain, France, Germany, Luxembourg, Malta, the Netherlands and Spain.

Weeks before the expirations, Britain rushed through measures to limit so-called "benefit tourism," by having new EU migrants wait for three months before applying for out-of-work payments and other benefits. The issue of eastern European immigration is a highly sensitive one in Britain, where the Labour government in power when the EU expanded east in 2004 vastly underestimated the number of new arrivals and admitted it should have done more to limit the influx.

"We had a pretty difficult experience when the eight countries joined a decade ago," Nigel Mills, a lawmaker from Prime Minister David Cameron's Conservative Party, told AFP.

"We had forecast 13,000 coming and more like a million came. It was pretty disastrous."

Like Britain, prosperous Germany also presents a strong lure to Romanian and Bulgarian migrants. The minimum wage for a 19 year-old there is the equivalent of $1,140 per month, compared with $232 in Romania and $208 in Bulgaria, according to the World Bank's 2014 economic profiles of the countries.

Bucharest and Sofia have slapped down the immigration fears, with both Romanian premier Victor Ponta and his Bulgarian counterpart Plamen Oresharski repeatedly saying in December that there would be no mass arrival of migrants from their countries on January 1st.

In Sofia, President Rosen Plevneliev said in his New Year's Eve speech that Bulgarians "would like to have a worthy job" at home, and "not to buy a one-way ticket and leave Bulgaria".

Not all voices in Germany have been alarmist on the immigration issue.

Germany, where the population is getting older, "needs at least 1.5 million qualified foreign workers in the coming years to maintain its growth and to guarantee its social system," Martin Wansleben, the director of German Chamber of Commerce and Industry, was quoted as saying on Saturday in the "Neue Osnabruecker Zeitung" daily.

"We must continue to improve the reception of immigrations, it's a duty for the entire society," he said.