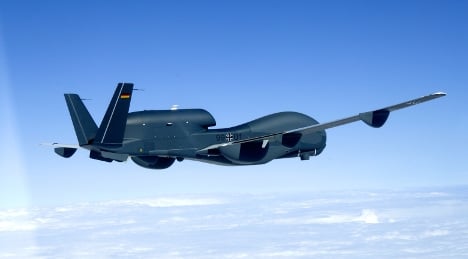 The purchase of Euro Hawk drones was a disaster in Germany, but military chiefs now want to look again at the use of armed drones. Photo: DPA

The Armed Forces Association (Bundeswehrverband), commander of Germany’s troops in Afghanistan, and the Parliamentary Commissioner for Armed Forces have all spoken out in support of drones.

Germany’s drone buying programme stalled when the last defence minister, Thomas de Mazière, spent hundreds of millions of euros on Euro Hawk drones that were not allowed to fly in German airspace.

The use of armed drones is highly unpopular in Germany and a draft version of the coalition agreement drawn up between Chancellor Angela Merkel’s conservatives and the centre-left Social Democrats (SPD) rejected “illegal killings” by drones.

But it did not rule out their future use and the Bundeswehrverband has called on the new defence minister, Ursula von der Leyen, to come to a decision soon on purchasing drones.

On Thursday, Bundeswehrverband head André Wüstner said: “When soldiers are sent into action, the optimum equipment must be available to them.”

He said drones could be used to protect German troops in Afghanistan from 2015, after the majority of soldiers have withdrawn.

And the head of German troops in Afghanistan, General Major Jörg Vollmer also called for drones to be used saying they were “a means that ensures the best possible protection of our soldiers.”

Parliamentary Commissioner for Armed Forces Hellmut Königshaus said the protective role of unmanned drones should also be given greater weight in the debate about their use.

“We can’t leave our soldiers unprotected,” he said. But he added the ethics of using drones would also be considered.

On a visit to Afghanistan before Christmas, defence minister von der Leyen told troops she would spare no expense in ensuring their protection, but she is yet to come out in support of purchasing armed drones.

At the moment Germany’s military only has drones for reconnaissance missions and uses the Israeli Heron 1 drone. But that contract only lasts until October 2014 and is expected to be extended for another six months.

The Ministry of Defence is examining the purchase of larger Israeli and American reconnaissance drones after the Heron 1 contract ends, which could in theory be armed at a later date.

But the SPD has said it would not support purchasing armed drones which could rule out their use for the next four years.