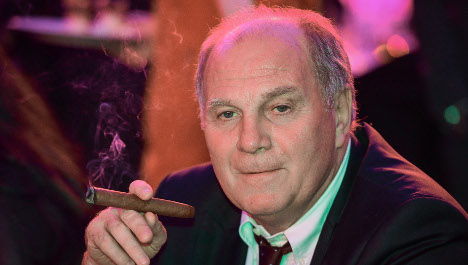 Hoeneß is due to stand trial in March for allegedly holding millions of euros in a Swiss bank account to evade taxes in Germany.

His case was made public in April 2013 and according to a report on Thursday, 25,000 people came forward to authorities last year to declare unpaid tax – a threefold increase on 2012.

This landed state treasuries with a windfall of €3.5 billion, the Süddeutsche Zeitung newspaper said.

The newspaper asked all 16 German states for figures on the number of people voluntarily declaring unpaid tax in 2013.

According to the Süddeutsche, authorities now want to clampdown on tax avoidance at both federal and national level. The newspaper said a meeting of states’ finance ministers was being planned for the first weeks of 2014.

Those declaring tax on past income will be the focus of the meeting, with tax evaders only protected from the law if they declare unpaid taxes and correct false statements dating back ten years, rather than the current five years.