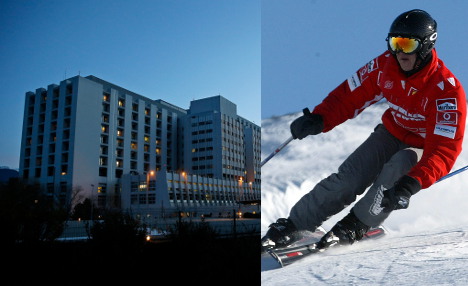 Michael Schumacher pictured skiing in Italy in 2006 and the CHU hospital in Grenoble where he is being treated. Photo: DPA

"At the moment, he is stable," his manager Sabine Kehm told reporters outside the hospital in the French Alpine city of Grenoble on Wednesday.

The F1 legend remained in an induced coma Wednesday after spending a third night in hospital with severe brain injuries sustained during a skiing accident in the French Alps.

The German racing great entered the new year in a critical condition with his family at his bedside and doctors unsure of his future after a second operation to remove a blood clot in his brain.

The seven-time world champion fell and slammed his head on a rock while skiing off-piste on Sunday at the upmarket Meribel ski resort.

Reports the 44-year-old was left fighting for his life stunned the sports world and legions of Formula One fans.

On Tuesday doctors were surprised by a slight improvement in his condition which allowed them to perform the second nearly two-hour long procedure, but
said he was "not out of danger" yet.

Jean-Francois Payen, head of the intensive care unit at the hospital in the French Alpine city of Grenoble, warned that Schumacher was not out of the woods.

"We cannot speculate on the future," he said. "We cannot say he is out of danger but we have gained some time."

He said scans showed that the removal of the bleeding had been done in a "satisfactory manner", but ruled out Schumacher's transfer from the hospital as it could be "dangerous".

Doctors have said that Schumacher, due to turn 45 on January 3, has age and physical fitness on his side.

He had been put in a medically induced coma to spur recovery. His temperature has also been reduced to around 35 degrees Celsius (95 degrees Fahrenheit) to reduce swelling.

By being unconscious, the brain is also switched off to sounds, light and other triggers that cause the organ to use up oxygen as it processes the stimuli.

A source close to an investigation into the off-piste accident at the upmarket ski resort of Meribel told AFP that Schumacher's helmet, which medics say saved his life, was smashed "in two" by the impact.

According to his manager Sabine Kehm, Schumacher was skiing "with a small group of friends" as well as his 14-year-old son Mick.

She told reporters at the hospital that he was not skiing at high speed when the accident happened. "He seems to have hit a rock as he took a turn. It was a chain of unfortunate circumstances."

Kehm added that the accident could have happened even "at 10 kilometres (six miles) per hour" and took place during "a normal turning manoeuvre".

Schumacher's condition has attracted attention from around the world and several people have tried to sneak through the hospital and approach the former racer, she said.

"There apparently was a person dressed up as a priest, who tried to get near Michael. I am asking everyone to let the doctors work and leave the family spend peaceful time with Michael."

Asked whether the priest was a journalist, she said: "It's what I was told… We have clearly noted that people are trying to get beyond the press room here in the clinic. It's revolting, in my opinion."

Schumacher, who won the last of his world titles in 2004, towered over the sport since his debut in 1991, winning more Formula One world titles and races than any other.

His duels in his heyday with Damon Hill and Jacques Villeneuve, fired by an unquenchable competitive spirit, have gone down in Formula One lore.

Schumacher was born in January 1969 near Cologne, Germany, the son of a bricklayer who also ran the local go-kart track where his mother worked in the canteen.

By 1987, Schumacher was the German and European go-kart champion and was soon racing professionally. In 1991 he burst into Formula One by qualifying seventh in his debut race in Belgium and a year later, he won his first Formula One grand prix.

He joined Ferrari in 1996 and went from strength to strength over the next decade, dominating the podium, before retiring aged 37.

But he could not resist the lure of the track and in 2010 he came out of retirement, signing a deal with Mercedes before quitting for good in 2012.