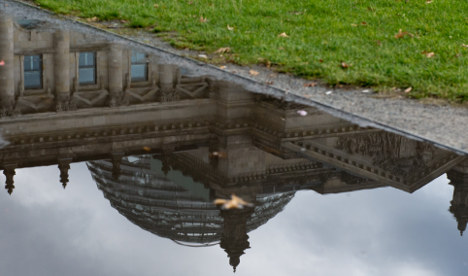 The Bundestag has a collection of 4,000 artworks. Photo: DPA

The Bild newspaper reported on Monday the 1905 Georg Waltenberger oil painting "Chancellor Bülow speaks in the Reichstag" is one of the works concerned.

The art advisory council of the Bundestag identified this, and a chalk lithograph called "A street in Königsberg" by Lovis Corinth in 1918, as having been stolen, or sold under duress, it said.

The second work is said to have come from the Gurlitt collection – a significant share of which was found in the Munich flat in February 2012 of Cornelius Gurlitt, the son of a Nazi art dealer, and confiscated by authorities.

His father Hildebrand Gurlitt was an art dealer tasked by Adolf Hitler to buy up so-called degenerate art from across the country and sell it abroad to rid the Reich of its bad influence – and to earn hard currency. The art he sold came from individuals and museums.

After the war Gurlitt said his collection had been destroyed, but more than 1,000 works of art were confiscated from the flat of his son Cornelius earlier this year. Many are the subject of restitution claims.

Four years ago the Bundestag had to return the Franz von Lenbach painting "Bismarck with a floppy hat" after the heirs of Nazi victims proved it had been stolen.

An art historian has been working on the orders of the Bundestag art advisory council to check the provenance of the parliamentary art collection of around 4,000 works.

The collection includes 108 art works of undetermined provenance which may have been stolen, the Bild reported.

Dieter Graumann, president of Germany's Central Council of Jews has demanded publication of this list.

But the parliament said there was no evidence linking the paintings to Gurlitt and denied the claims.