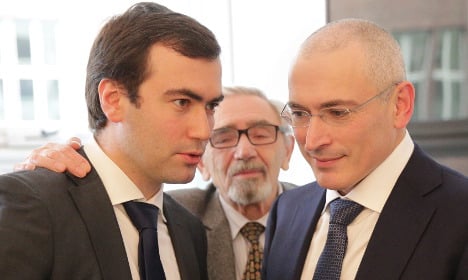 Mikhail Khodorkovsky (r) with his son and father.

"The family is coming today," spokeswoman Olga Pispanen told AFP. "They have not been together for 10 years."

They will meet up in Berlin where Khodorkovsky went after walking free from a prison in northwestern Russia following a pardon from President Vladimir Putin on Friday.

Khodorkovsky, who has said he would stay out of Russia, is mulling a move to Switzerland where his twin sons go to school and would like to discuss that plan with his family, the spokeswoman said.

The Swiss foreign ministry said he applied on Tuesday for a three-month Schengen visa to travel to Switzerland.

Khodorkovsky's wife Inna and their three children, who are believed to have been in Moscow when Khodorkovsky flew to Berlin, have had to sort out their travel documents before going to Germany.

"My family is my main treasure and we are together despite the years, kilometres and barbed wire," Russia's one-time richest man said in one interview from prison.

He said he had seen lots of lonely people in prison and felt "ashamed" because he had a great family.

"In the lottery of fate I won big time," he said, stressing his wife was waiting for him.

"I would not be able to exist without her. She is one half of my heart."

On Saturday, Khodorkovsky, 50, reunited with his elderly parents, Marina and Boris, and his eldest son Pavel, a child from his first marriage.

Putin shocked Russia on Thursday by announcing he would pardon Khodorkovsky, who was jailed for financial crimes in separate convictions in 2005 and 2010. He had served time in Siberia and the region of Karelia close to the Finnish border and had been due for release in August 2014.

Russian investigators had earlier raised the prospect of a third criminal case against the Kremlin critic.

Khodorkovsky asked for a pardon on humanitarian grounds because his 79-year-old mother suffers from cancer.

His daughter Anastasia Khodorkovskaya said she was driving and became "hysterical" when she received a text from her mother saying their father would soon be released.

"I stopped at a traffic light and realised I could not go any further," she told opposition magazine The New Times, noting her two brothers Ilya and Gleb were in a state of "quiet shock."

"They have only seen and remember him from within prison walls."

"I do not remember the last time we celebrated the New Year as a family," she added. "When dad was put in jail I was 12."

Khodorkovsky's supporters say the imprisonment was Putin's revenge against the former oil tycoon who financed the political opposition and openly criticised the Russian strongman.

His Yukos oil firm was broken up and sold off to the state.

Khodorkovsky told reporters in Berlin on Sunday that he would not seek revenge against Putin and has pledged to help political prisoners held in Russian jails.

In a statement posted on his website Tuesday, he congratulated two Pussy Riot punk rockers on their own release from prison but urged them to also reject vengeance.

"The main thing now is probably to find it in yourselves not to leave hatred and anger in your heart after the trials of imprisonment," Khodorkovsky said.

Maria Alyokhina, 25, and Nadezhda Tolokonnikova, 24, on Monday walked free two months early under a Kremlin-backed amnesty after serving most of their two-year sentences for staging a protest performance against Putin in Moscow's main cathedral.

"I am happy to learn that the torture unworthy of a European country in the 21st century has come to an end," said Khodorkovsky.

"The release of political prisoners makes the authorities at least a little bit more humane."