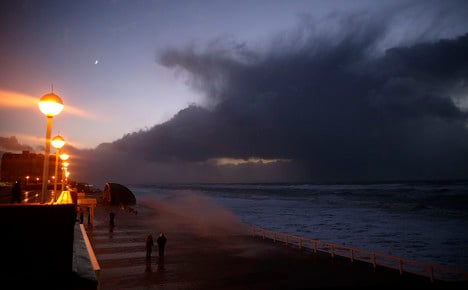 With chances of snow out of the window and a low pressure system swirling towards Germany bringing rain and wind, Christmas will be a damp one. Meteorologists said that a storm will hit the north by the 24th, but that it would not be as severe as others in recent weeks.

Monday has brought prolonged rain over the south east and east and scattered showers in the north, intensifying over the course of the afternoon. Highs on the Baltic coast will be 6C while further inland will see around 13C. There will be a brisk wind, especially near the sea.

And Monday night will bring rain across the western half of the country, while the south will be covered in fog and the east patchy. The Alps could be as cold as -4C while the rest of the country will be a more balmy 9C.

Tuesday, the main day of Christmas celebrations in Germany, will see grey, heavy skies but surprisingly little rain. Only the south and south east will be lucky enough to see small patches of sunshine. It will be an usually mild day for December, with highs between 8C and 14C.

Those along the North Sea coast should, the DWD said, hold onto their hats, as it will be very windy. It will also be windy in the Alps and in central hilly regions as well.

As night falls on Christmas eve, so will rain, everywhere. Areas 800 metres above sea level will see this fall as snow. Lows will settle between 9C and 0C and a light frost is possible south of the Danube.

Wednesday, Christmas Day, will be rainy from the start – even in higher regions. The very outskirts of the east and south eastern states will see a bit of sunshine, though. Highs will be between 5C and 11C and the wind will have subsided.

By Thursday, rain should have started to push east, leaving the west of Germany a little drier but Bavaria drenched. Highs will be between 4C and 8C. Thursday night is shaping up to be a little more December-like, with lows of -2C.