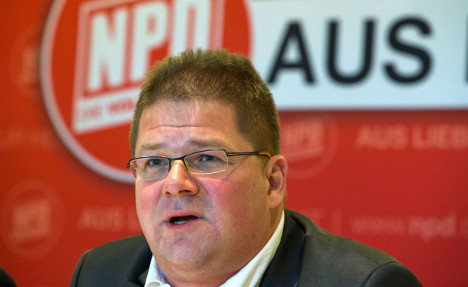 Holger Apfel said on Thursday he was stepping down due to ill health. Photo: DPA

Holger Apfel announced on Thursday he was quitting as the party’s head and from his position as NPD leader in the Saxony parliament, citing health reasons.

But the man who has led the party since 2011 could now be chucked out of his own party, Spiegel Online and broadcaster ARD reported on Sunday, due to rumours about his private life.

The party’s leadership wants a fuller explanation from Apfel about why he stepped down, Spiegel reported.

In a statement, the party said it was "astonished" to learn that poor health was only part of the reason why Apfel left and said “further allegations concerning misconduct in the past” must be addressed by Apfel.

It did not go into details about this misconduct, but Spiegel reported that the party leadership will look into allegations that Apfel had been open to blackmail.

In a statement after he stepped down as leader, Apfel said he was under pressure from other party members who had been making “defamatory” allegations about him. He said the allegations were “baseless.”