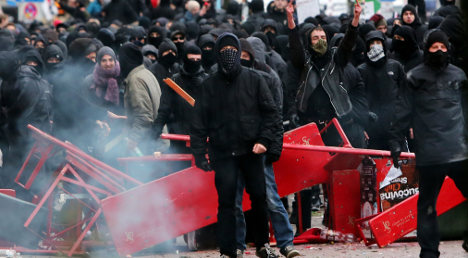 A protest took place on Saturday afternoon over the eviction of squatters from the Rote Flora building in the Schanze district. The building has served as a home for squatters as well as a cultural and political meeting point for left-wing activists for more than 24 years. But the owner of the building, Klausmartin Kretschmer, has demanded that they leave.

This prompted a demonstration which turned violent. Police put the number of protesters at 7,300 and said 4,700 were from the far-left scene, while organizers said more than 10,000 people took part.

According to police, 120 of their officers were injured, 19 of whom badly. They came under attack from stones, bottles and fireworks. Police reacted with water cannon and tear gas. Left-wing groups said 500 protesters were injured. Cars were set on fire and buildings including supermarkets, hotels and banks were damaged. Police arrested 21 demonstrators.

Police spokesman Mirko Streiber said: "There was an aggressive underlying atmosphere from the start. We were hit badly. It was a level of violence that we have not seen for a long time.”

But the demonstration’s organizers criticized the police for their aggressiveness and attacking them with pepper spray, water cannon and truncheons. The protesters said they were also demonstrating for the rights of refugees in the city and against plans to pull down the city’s Esso houses. The Esso houses, named after the petrol station outside, had to be evacuated last Saturday as they are falling into disrepair.