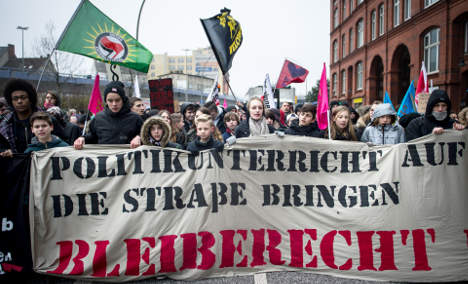 Protesters will be out in force to support the right of Hamburg's Lampedusa refugees to stay in the city, while demonstrations also take place against the planned eviction of squatters from the Rote Flora building and the demolition of a block of flats known as 'the Esso houses'.

Finally, there will be a rally calling for more community spaces and less consumerism, according to an article in the Hamburger Morgenpost.

Police may also face the prospect of crowds of fans flooding the streets as Hamburg's Bundesliga team HSV play a home match against Mainz 05.

City police have drafted in support from forces in Bavaria, Baden-Württemberg, Hesse, Saxony-Anhalt and Lower Saxony as they face arguably their toughest test of the year, reported the Hamburg newspaper.

Over the previous three Saturdays, protesters have taken to the streets in solidarity with the refugees, who fled from their home countries, taking a dangerous boat-crossing to the small Italian island, Lampedusa.

After making their way to Hamburg earlier this year, the around 300 refugees, who come from countries including civil-hit Syria, conflict-ridden Egypt and Libya, are  fighting for their right to stay in the city.

Until now, the Hamburg Senate has denied the entire group the right to stay, although a large number of them have registered with the authorities and are applying for the right to stay in Germany, according to the newspaper.

The protest will take place from noon until 4.30pm with around 500 demonstrators expected to turn out. Participants will meet at Steindamm Street close to the main train station and march to Binnenalster Lake, also in the city centre.

Meanwhile, in Schulterblatt Street in the Schanze district, the Rote Flora demonstration is expected to begin at 2pm.

The building has served as a home for squatters as well as a cultural and political meeting point for left-wing activists for more than 24 years.

While the dispute over the squatters' rights has been ongoing since they first became residents in 1989, the owner of the building, Klausmartin Kretschmer, has demanded that they leave. Although Kretschmer had said he wanted the squatters out before December 20th, he told the Hamburg Morgenpost that the building need not be cleared so quickly.

However, he did say that if the squatters did not leave in due course he would ask Hamburg authorities and courts to clear the property.

Still, the Rote Flora squatters' organisation said the demo would  "give us strength for the upcoming protests.”

‘Save the Esso houses’

The route of the Rote Flora protest will run through the districts of St. Pauli and Schanze, stopping in front of the Esso houses in Spielbudenplatz at 4.30pm.

Named after the Esso petrol station in front of the building, the flats are in danger of collapsing and had to be evacuated on Saturday after a concerned tenant called the police reporting that "the whole house is shaking," according to a report in the Hamburger Morgenpost.

Protesters, who want to see the flats repaired and maintained, are demonstrating against plans to pull down the apartment blocks. Although authorities had planned the demolition for next summer, leader of the district office, Andy Grote, told a local radio station it was likely to take place in the first quarter of 2014.

Last Sunday, around 800 demonstrations turned out in a bid to save the blocks from demolition, according to NDR.

Meanwhile, around 800 protesters are expected to take action in a demonstration titled "Community spaces, not consumerism. The city belongs to everyone," in front of the Chamber of Commerce in Hamburg's Adolphsplatz, according to the Hamburger Morgenpost.

The police have rejected this location and suggested Schanzenstraße instead – where the Rote Flora demo is happening. But the applicants are likely to appeal against their decision and have indicated they will protest spontaneously.