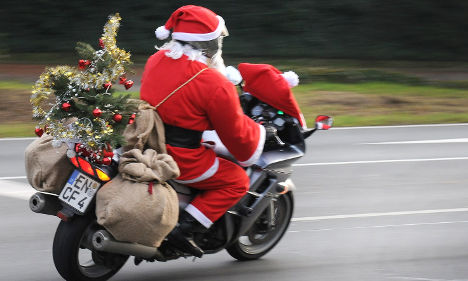 According to German wood industry association the HDH, Germans bought around 100,000 more trees in 2012 than 2011. But the mighty Tannenbaum is no passing trend. The first Christmas tree was planted around 500 years ago by Germans, and the tradition has grown stronger ever since.

For such an international phenomenon, the history of the Christmas tree remains mysterious to many. The historical roots of the Tannenbaum start with a group of young German merchants in the Baltic.

Christmas does of course have a pre-Christian history, and decorating the house during the dark winter months is a tradition that precedes Christianity, and its German connection, by thousands of years.

Many ancient societies included the custom of bringing evergreen plants into homes during the cold months as a reminder of the summer. From northern European Vikings, to the Romans and Ancient Egyptians, urging the sunny months back and warding off evil spirits with evergreens was commonplace.

Skip forward a millennium or so, and a more recognizable Christmas tree was beginning to take shape, thanks to a guild of German merchants who supposedly erected the first Weihnachtsbaum in 1510, in the Baltic city of Riga, Latvia.

Stories describe the Brotherhood of Blackheads, a guild for unmarried German merchants, erecting a spruce tree outside their headquarters during the winter and setting it on fire in a ritual celebration of the birth of Jesus, and the urging back of the warm weather. The plaque can still be seen today at the spot.

Riga was not only a powerful trading port, but a popular stop-off point for Christian pilgrims. The combination of foreigners missing home and devout religious pilgrims made it a hotspot for burgeoning Christmas traditions.

By the mid-16th century, young German men were setting up spruces in town squares then setting them alight as a regular part of the winter festivities. The trees would often be decorated beforehand with nuts, paper flowers, and pretzels.

These trees became more widespread across Germany and Scandinavia, with families placing trees outside their houses, in a similar vein to their ancient predecessors.

As decorating the trees became increasingly popular, families began to bring their festive creations indoors. Children would often raid the tree for its edible decorations on Christmas Eve, and soon presents were put beneath them.

The introduction of the Christmas tree to the US can also be credited to Germans. Reports suggest that German settlers in Pennsylvania and Ohio put up the first American Christmas trees in the 18th century.

It took a while for the custom to spread through the country, however, as the Puritan movement managed to force a ban on Christmas trees into the 19th century.

But as Puritanism waned, it was the power of the celebrity that finally brought the Christmas tree transatlantic popularity, when a picture of Queen Victoria, with her German husband Prince Albert and their family with a Christmas tree was published.

The picture went viral, at least in Victorian terms, and soon enough people were clamouring to get a tree of their very own – a tradition which would be repeated year after year until the present day.

The man behind the Queen’s continental Christmas choice was none other than her German husband, Prince Albert, who apparently longed for a reminder of home in the palace during the festive season.

The average German household spends around €17 on a Christmas tree measuring 1.63 metres, 70 percent of which were grown in Germany itself.

Last year, a growing trend for having a second tree outside in the garden, or balcony, as well as more lone-dwellers buying trees, pushed sales up, said HDH head Dirk-Uwe Klaas.

So when you're diving into the presents nestling underneath the tree this year, spare a thought for the Blackheads, who unknowingly helped to create one of the most iconic festive images all those years ago in Riga.