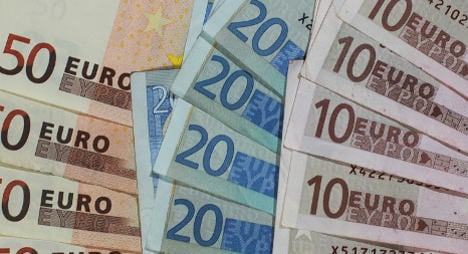 Although wages actually increased by 1.3 percent, consumer prices rose more, by 1.6 percent, creating the discrepancy, according to Federal Office for Statistics.

The office put falling income down to the relatively small wage increases in the third quarter of 2013 caused by lower bonuses in the banking and insurance sectors.

However, it wasn't all doom and gloom on the wages front for German workers.

In the industrial sector, wages increased by an average of 2.3 percent, or 2.1 percent excluding bonuses, according to the statistics office.

The average full-time pre-tax pay packet in the third quarter was €3,462, with those in banking earning the most on average at €4,576 per month.

The lowest earners were those in the hotel and restaurant industry, who took home an average of €2,012 pre-tax.

Germany has weathered the financial crisis since 2008 better than most European countries. While wages dropped by 0.2 percent on average in 2009, they have remained relatively stable since then, rising by 1.5 percent in 2010, 1.2 percent in 2011 and 0.5 percent in 2012.