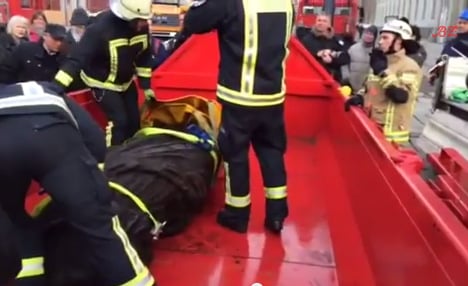 The sandstone statue was lifted from the river bed on Wednesday. Photo: Youtube screenshot/BZ

At around midday two divers from the fire brigade dived 2.5 metres underwater to retrieve a large sandstone statue of a woman, the BZ newspaper reported.

The figure, which was languishing on the river bed near the Foreign Office, was discovered when technical work was carried out there last year, according to the BZ.

The statue is thought to be over 140 years old and heritage experts are speculating that it once belonged to a group of figures that stood on the Neue Münze, a former mint.

It dates back to 1870 and was commissioned by Prussian architect Friedrich August Stüler who also built the New Museum on Berlin’s Museum Island and part of the Berlin Palace.

The Neue Münze was badly damaged in the Second World War and was eventually torn down in the early 1950s.

It is unclear whether the sculpture fell into the Spree when the building was demolished or whether it was blown into the river by a bomb during the war, the BZ said.

Doris Wollenberg from the Belin’s Momument Office was present when the divers Rainer Keck, 43, and Handrik Franke, 36, plunged into the six degree C water to attach a belt around the statue.

A 30-tonne crane then lifted the stone figure onto the river bank where it was laid down shortly before midday, according to the BZ.

“She is covered in algae and muscles but is in a better state than we had expected,” said Wollenberg. “Around 80 percent of her is still there, including the folds in her clothes,” she added.

Now it is up to historians to work out the true identity of the statue. They aim to solve the mystery by January, according to the BZ. “Then we will figure out what happened to her,” said Wollenberg.