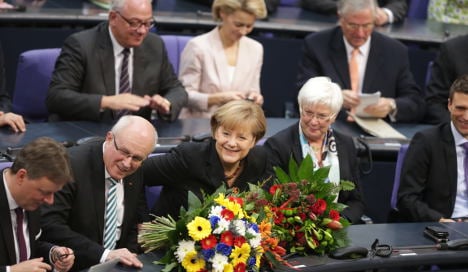 Merkel beams after the vote confirmed her as chancellor for the third time. Photo: DPA

Eighty-six days after Merkel, 59, swept to victory in elections but failed to grab an outright majority, the Bundestag lower house of parliament voted to give her another four-year term.

The ballot was secret but the outcome was no surprise. With a whopping 504 of the 631 seats, Merkel's conservatives and their new centre-left partners, the Social Democrats (SPD), hold a comfortable majority under their hard-fought "grand coalition" deal.

She won 462 votes with 150 voting against and nine abstentions.

After the vote she must be confirmed by President Joachim Gauck at the presidential palace in Berlin before returning to the Bundestag to be sworn in as Germany's only third post-war chancellor to win a third mandate.

The ceremony and later swearing-in of ministers followed by the first cabinet meeting will enable Merkel to finally get back down to business in earnest after the longest government-building period since World War II.

Merkel is then due to address parliament Wednesday and travel to Paris for talks with President Francois Hollande the same day, ahead of an EU summit at the end of the week.

A parliament debate after Wednesday's address will be the first opportunity for a face-off across the floor since the SPD moved off the opposition benches.

Merkel has defended the time spent haggling over policy and posts with an initially reluctant SPD as time well spent, voicing appreciation on signing the coalition pact Monday "that we listened to each other".

Having wrested concessions from the conservatives in negotiations to pave the way for the new coalition, SPD chief Sigmar Gabriel, the new vice chancellor and economy and energy minister, will need to impose his party's imprint on the new government to avoid the costly mistakes of its first tie-up with popular Merkel.

Cartoonists in Monday's Tagesspiegel newspaper depicted her in a wedding dress next to her 'groom' Gabriel pledging "until death do us part" — Merkel clutching a dagger and Gabriel with a gun.

Merkel on Monday promised "solid finances, secure prosperity and social welfare" and said that "a grand coalition is a coalition for grand tasks — we want to make sure that the people in 2017 are better off, even better off, than they are today."

News magazine Spiegel online commented that Merkel was "at the peak of her power."

Merkel keeps her trusted lieutenant Wolfgang Schäuble as finance minister to continue Berlin's tough loans-for-reform stance toward troubled eurozone countries and as the watchful guardian of the German public purse.

The SPD gets the foreign ministry, where Frank-Walter Steinmeier returns as Germany's top diplomat, while the CDU's rising star Ursula von der Leyen, a worldly high achiever and mother-of-seven, takes over the defence ministry.

Despite its poor election outcome, the SPD came out of coalition talks with trophy concessions such as a national minimum wage and pension benefits that helped win over the party base, who signed off on the deal at the weekend.

Few observers doubt though that the road ahead will be bumpy.