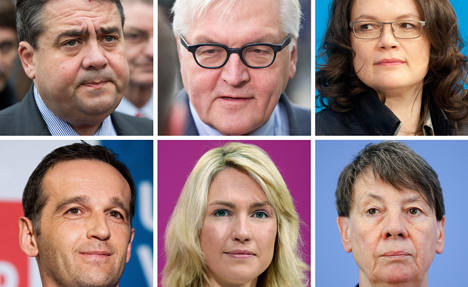 Merkel faced reporters after a meeting of her Christian Democrats (CDU) and announced the widely expected reappointment of Wolfgang Schäuble as finance minister.

"She will have an exciting, very challenging task and I am certain that she will do it very, very well," Merkel said. Earlier Sigmar Gabriel, leader of the Social Democrats (SPD), junior partners in the power-sharing government, said he would become Merkel's vice-chancellor and head up what the media labelled a "super ministry" responsible for the economy and energy policy.

Frank-Walter Steinmeier will return as foreign minister, a job he held under Merkel during her first term from 2005-2009 when she also led a left-right "grand coalition".

The SPD kept a pledge to fill half of the cabinet seats allotted to them with women.

Party vice-chairwoman Manuela Schwesig is to take charge of family affairs, and SPD treasurer Barbara Hendricks is headed for the environment ministry.

Gabriel said another SPD deputy leader, Aydan Ozoguz, would become state minister for immigration, refugees and integration – the highest office ever held in Germany by a woman from the country's three-million-strong Turkish community.

Von der Leyen, a rising star in the CDU, has at times openly challenged Merkel on policy – most recently this year over a call for binding quotas for female executives.

By handing her the high-profile defence brief, Merkel indicated that she did not bear a grudge and inspired rampant rumours about a bright political future in Berlin.

"With this appointment, she has definitively manoeuvered herself within the CDU into the role of the crown princess," news website Spiegel Online said of von der Leyen.

The "super ministry" that Gabriel, a former environment minister, will lead is to manage Germany's transition away from nuclear power and toward greater use of renewables.

The brief stems from Merkel's abrupt decision in the wake of Japan's Fukushima nuclear disaster in March 2011 to shut down all of Germany's reactors by 2022.

The radical policy shift has seen energy costs rise for consumers and driven up greenhouse gas emissions as the country turns to coal to fill a power supply gap.

Given the complexity of the task, many analysts saw the appointment as a poisoned chalice handed by Merkel to Gabriel, her likely challenger in 2017 should she stand for a fourth term.

"We have hard work ahead of us," Gabriel acknowledged but added: "This cabinet make-up fulfils the wishes of the SPD."

Analyst Claire Demesmay of the German Council on Foreign Relations, a Berlin-based think tank, said Merkel and her returning foreign minister Steinmeier had a good working relationship despite different takes on complex countries such as Russia.

"He has always advocated a more pragmatic approach on Russia policy by calling for dialogue while Angela Merkel has taken a harder line," Demesmay said.

Merkel hailed Schäuble, the main architect of Germany's tough-love response to the eurozone crisis, saying he stood "for the stability of the euro and the policies connected to it".

She is to be formally elected by the Bundestag lower house of parliament on Tuesday, when the new cabinet will also be sworn in.

Germany, Europe's top economy, has endured nearly three months of political limbo since a September general election saw a triumph for Merkel and her Christian Union bloc but left them short of a ruling majority.

The ensuing coalition negotiations with the SPD, which came in a distant second place, lasted a gruelling seven weeks.

Gabriel put the coalition pact to an unprecedented binding vote among SPD members, 76 percent of whom backed the new government according to results he announced on Saturday.