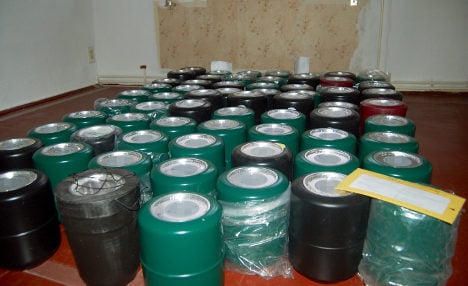 The urns were found in Saxony-Anhalt last week. Photo: DPA

The unburied urns, stored in neat rows in the room, were discovered in Stolberg, Saxony-Anhalt on Wednesday.

Police said on Friday that a former funeral director was under suspicion for fraud. He allegedly took orders for sea funerals from across Germany, but never carried out the service.

Instead he kept the remains in the urns and stored them in the room.

But the man, named as 56-year-old Gerald K., denied the accusations. He claimed he took the urns for funerals but was never paid for the service. He picked up the bill himself for the cremation and transfer of the remains.

He said he told authorities about the urns but never heard back from them.

Police said it was unclear how long the urns had stood in the room and refused to reveal where they are now. “You should let the dead rest,” said Katrin Buchmann leader of the local authority. The urns are thought to date from 2011 and 2012 and Buchmann warned it would take some time to trace them back to their relations and find out who they were.

Spokesman for the German Association of Funeral Directors Oliver Wirthmann said: "For the families it is a great humiliation.”

He said the case was not only criminal but also ethically, morally and religiously reprehensible.