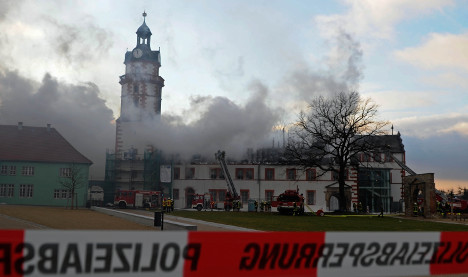 Schloss Ehrenstein in Ordruf, Thuringia, was badly damaged in the blaze which broke out in the middle of the day on Tuesday. Half of the roof was completely destroyed, a police spokeswoman said.

Two of the 22 fire fighters were injured at the scene, where they and more than 100 colleagues tried to contain the blaze.

A Frankish castle with a moat was first built on the site in 531, and the site has seen various incarnations of the building over the centuries including an abbey which was destroyed in a fire in 1184. The present palace dates back to the Renaissance.

From 1956 to 1966 the Soviet army used the buildings as a school but it was then pretty much abandoned.

In 1971 a reconstruction project began and the palace is now museum as well as home to the town library and archive.