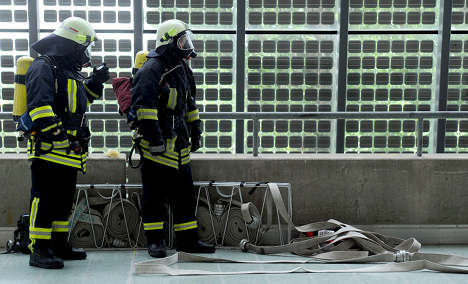 A blaze started in a six-storey retail and residential building at around 7pm, the Weser Kurier newspaper reported. A passer-by noticed a strong smell of smoke and rang the emergency services.

Over 30 emergency service vehicles turned up at the site along with 75 firefighters to get the 70 people thought to be living in the building out – 12 of whom suffered from smoke inhalation and had to go to hospital.

The fire is thought to have started in the cellar near bins containing flammable rubbish and took over two hours to put out.

Just over three hours later a second fire broke out in an eight-storey building a few kilometres away in the Mittelshuchting area. As flames ripped through the second storey, many residents were unable to leave their flats.

After turning up at 10.30pm firefighters had put the blaze out at 11pm, but 21 people had to go to hospital.

The second fire has been taken over by the criminal investigations office, but the first has not.

Around 200 firefighters tackled the blaze which caused millions of euros of damage.

A police spokesman said the fire was brought under control in the early hours of Monday morning. There were no injuries and the cause of the blaze is not yet known.