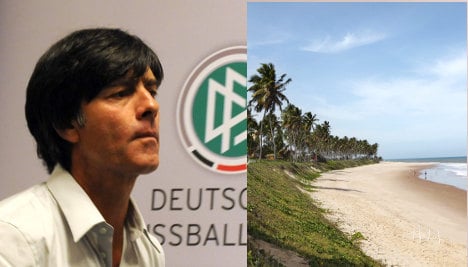 Coach Löw plans to build a World Cup base from scratch in the state of Bahia. Photo: DPA

Löw, who wants his team’s preparations to be perfect, has decided to take the unusual step of constructing his team’s base from scratch ahead of next summer’s tournament.

The site will be called “Camp Bahia” after the Brazilian state it is in.

According to the Bild newspaper, the complex will include 13 apartments, a training pitch and a press centre. It will be home to the players as well as the backroom staff for the duration of the competition.

Other hotels such as the Mabu Costa Brasilis Resort, just 200 metres up the coast, were not up to scratch according to Bild.

Located in the small coastal village of Santo André, which has less than 1,000 inhabitants, the site is only 15 kilometres away from an airstrip where the German team will fly to their group games. Germany’s first match is in Salvador against Portugal on June 16th, the second in Fortaleza against Ghana on June 21st and the third in Recife against Jürgen Klinsmann’s US team on June 26th.

The matches' early kick-off times: twice at 1pm and once at 4pm (6pm and 9pm German time) will mean coaching staff will have to think carefully about when to travel to the games. It is usually considered sensible to travel two days in advance of a match.

But the location was not Löw’s only consideration. Germany’s 53-year-old coach recognized the need for impeccable pre-match preparations such as a carefully planned training schedule and the right amount of resting time between matches.

“We have already experienced that whether or not you make the final comes down to really tiny things,” said Löw.

Bild reported that the multi-million euro project is being financed and managed by a Munich-based company. The German Football Association’s sponsors, including Mercedes, are also helping with its construction, according to Siegfried Michler, a German hotel manager.

By December 18th all of the teams taking part must submit the locations of their respective training camps.