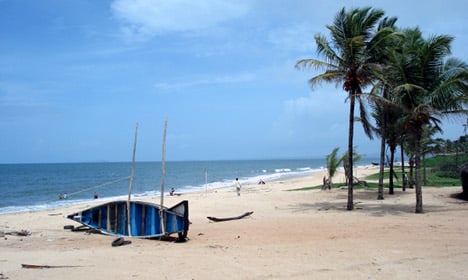 The suspect met his victim on a beach in popular tourist spot of Goa. Photo: DPA

Krishna Sharma, a 36-year-old from northern Uttar Pradesh state, was arrested in the morning at Goa airport as he was trying to leave, said police inspector Tushar Vernekar.

He is alleged to have raped the German woman in her guesthouse on Monday night.

Vernekar said the pair had met at Anjuna beach in north Goa for a party. The accused afterwards offered to drop the woman at her guesthouse about 15 kilometres away, where she said he raped her.

Police said an investigation was under way.

The arrest comes after Goan police last month arrested the editor of India's leading investigative news magazine, facing a possible rape charge that could see him jailed for 10 years, after a complaint from a colleague.

The issue of sexual harassment in India has been receiving widespread media attention since the fatal gang-rape of student in the capital New Delhi a year ago, which sparked angry protests across the country over violence towards women.

A survey in April found the number of foreign female tourists visiting India had dropped by 35 percent over a three-month period following the gang-rape and a spate of other sex attacks.

READ MORE: 'Legally just saying no is not enough'