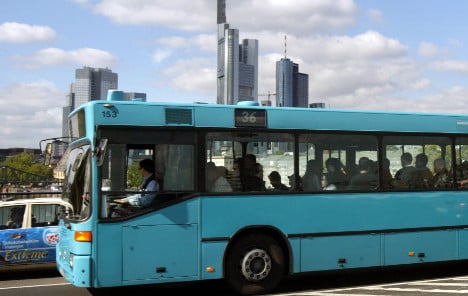 Not today, sonny. A bus in Frankfurt. Photo: DPA

Services union Verdi called the strike after negotiations over pay and conditions with the Hesse state association of bus companies failed to produce results.

Verdi negotiation leader Jochen Koppel told the Frankfurter Rundschau that nearly every bus driver in Frankfurt, Hanau, Darmstadt, Marburg and Fulda had joined the strike. "It is going better than very well," he said.

The union planned the strike to increase pressure on employers ahead of the fifth round of wage talks on December 20th, the paper said. Currently bus drivers earn €11.04 an hour gross. An offer to increase wages to €11.50 by 2015 has been rejected as not enough.

"We want the number 12 to stand before the decimal point," said Koppel. “People must be able to feed their families."

He said that increasing numbers of drivers were having to take on additional work despite their full-time employment on the buses.

Tuesday's strike was just a warning, he said, stressing that a bigger one was feasible.