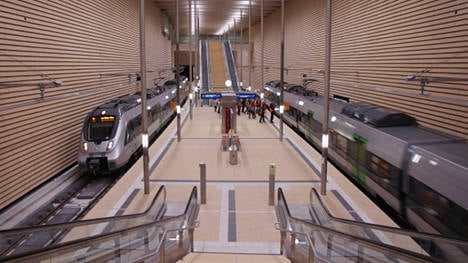 The four-kilometre-long tunnel will be the centre of a new regional train network. From December 14th, six new lines will connect central Leipzig with the surrounding areas and towns such as Zwickau and Chemnitz.

But the tunnel is four years late and €500 million overbudget.

Construction began in the city in Saxony in 2005, with the completion date set for 2009. Much like Berlin's airport, Stuttgart's train hub and Hamburg's opera house, this did not go to plan and the initial budget of €500 million has doubled to €1 billion.

This has not stopped the city council and train operator Deutsche Bahn from celebrating though. Next Saturday the main train station – which is the largest by floor area in the world – will be transformed into a party. Riding the new S-Bahns will be free between 3pm and 9pm.

Around 500 Leipzig locals had a preview of the new tunnel in November and came down on a Saturday night to test the trains, regional paper the Mitteldeutsche Zeitung reported.

Karla and Gerd Süptitz were part of the test-run. “It is such a good thing that Leipzig is finally getting this” said 70-year-old Gerd.