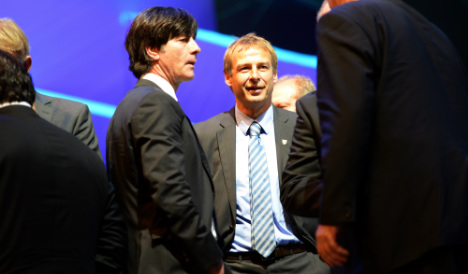 Löw's Germany kick off their Brazil 2014 campaign in Group G against Portugal in Salvador on June 16 before facing Ghana's Black Stars in Fortaleza on June 21st then take on the USA in Recife five days later.

"In our preparations, we have to get used to the humidity and high temperatures," said Löw.

"I have already been to Fortaleza and Recife, where we will find difficult conditions to acclimatize to. We will have to adapt our preparations."

The Germans have yet to decide between using either Salvador or Sao Paulo as their World Cup base with the FIFA deadline set for December 18th.

Löw will lead a delegation from the German Football Federation (DFB) to visit both hotels over the weekend before flying home.

All three games will be played on Brazil's coast, with the games against Portugal and the USA kicking off at 1pm local time, with average daytime high temperatures of around 30 degrees Celsius (86 Fahrenheit) expected in both Salvador and Recife.

The Ghana game in Fortaleza on the north coast will be played in similar temperatures despite the 4pm local time kick-off.

"We have to accept the group as it is, we now know who and where we play and we can take the next step to work for the World Cup," said Löw.

The Recife clash against the USA pits Jurgen Klinsmann, who coached Germany to third at the 2006 World Cup, against Löw, who succeeded him as German head coach in 2006 having been his assistant at that year's World Cup.

"So, we will be meeting old friends," said Löw.

"It's already something special to have the USA in our group.

"Jurgen and I have had a very good and close relationship for a long time. We have always exchanged ideas on a regular basis, but that will certainly change before the World Cup match."

The draw also means Berlin-born half brothers Ghana midfielder Kevin-Prince Boateng and Germany centre-back will face each other at another World Cup.

They both played when Germany beat Ghana 1-0 at the 2010 World Cup in South Africa in the group stages — the first time brothers had played on opposite teams at a World Cup.

"Brother, it's time again… that's how beautiful life is!" Schake's Kevin-Prince wrote on his Twitter account to Bayern Munich's Jerome.

Boateng will also be up against Schalke team-mate Jermaine Jones when the USA play Ghana in Natal on June 16th.

"You can see that dreams can come true. I am looking to another game against my brother at the World Cup. And also against my team-mate Jermaine Jones, he's simply great."