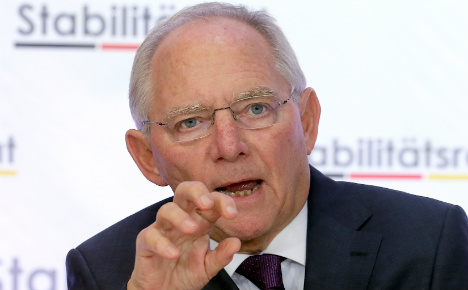 Finance Minister Wolfgang Schäuble was holding discussions on the subject in Berlin with his French, Italian and Spanish counterparts, as well as Eurogroup finance chief Jeroen Dijsselbloem, the finance ministry spokesman told reporters.

EU Commissioner Michel Barnier, ECB board member Jörg Asmussen and a representative of the EU's Lithuanian presidency were also attending, he said, adding that it was a "working meeting" to pave the way for Tuesday's EU finance ministers' talks in Brussels.

A European Commission spokeswoman said the meeting in the German capital was part of a push to reach agreement on the banking union in the coming weeks.

"Today's meeting was one of many, not the first, not the last," she said in a statement.

"There have been and will continue to be many meetings at all levels, every day, as you would expect as negotiations progress to find agreement on all banking union files before the end of the year."

EU finance ministers have been trying to narrow differences on the proposed banking union, a new framework meant to prevent a repeat of the financial meltdown that plunged Europe into crisis.

Although they approved in October a first step in the plan — the Single Supervisory Mechanism (SSM) to oversee eurozone banks — the ministers are under pressure to agree a Single Resolution Mechanism (SRM) by the end of the year.

The SRM would serve to close failing banks and would also need to be complemented by a deposit guarantee regime to protect savers.

Germany has opposed most of its EU partners over who should have the final say on the closure of banks under the new resolution regime.

But Schäuble said last month in Brussels that the issues needing agreement would be resolved by Christmas.

To put the banking union scheme in place by 2015 as planned, Asmussen has said there must be a decision on the SRM by year's end because it will still need to be approved by the European Parliament, whose mandate ends in April.