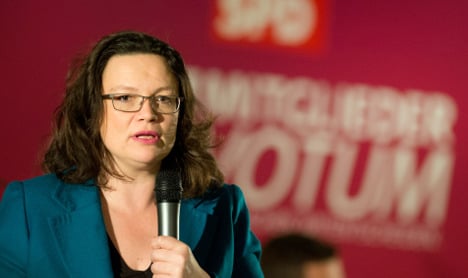 SPD members said they received threatening phone calls from a man claiming to work for the office of SPD’s general secretary Andrea Nahles, Stern and Zeit websites reported on Wednesday.

They were called by a telephone number from the SPD’s Berlin headquarters.

Nahles denies any knowledge of the calls and called them a “criminal act” in a letter to SPD members seen by news agency DPA. The party is looking into the calls.

The phone calls threatened consequences for party members’ careers if they voted against the “grand coalition” agreement made between the SPD and Chancellor Angela Merkel’s conservatives last week.

The SPD promised their 470,000 members that any deal with Merkel would be put to them in a vote. On December 14th members will decide whether to ratify or reject the deal – which would be a huge embarrassment for the SPD leadership.

Stern reported that one of the people called was the leader of the SPD in Bruchsal, Baden-Württemberg, Fabian Verch who had criticized the “grand coalition” deal.

The caller, claiming to work for Nahles’ office, said: “You do after all have ambitions in the party,” Verch said.

He wrote to Nahles to complain and she replied in an email that the caller did not “belong in the Social Democratic family” and that the call was likely to be a “criminal attempt to damage the SPD.”

The SPD’s last experience of a “grand coalition” with Merkel from 2005 to 2009 was an unhappy one and led to poor election performances.