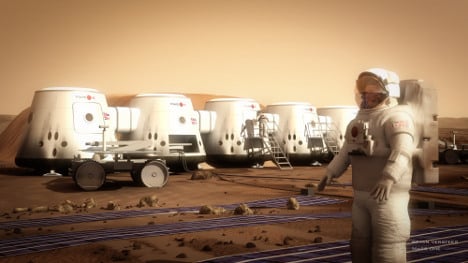 A computer generated image of the planned base on the red planet's surface. Photos: Mars One

The attempt to establish the first human colony on Mars, called Mars One, has picked up momentum since it began searching in April for adventuring souls to man the 2022 mission.

The Dutch-based project warned applicants that their trip to Earth's second-closest planetary neighbour would be a one-way ticket – the technology for a return journey does not exist yet.

Over 200,000 people from around the world signed up – 78,000 in the first two weeks – each submitting a one-minute video arguing why they should be one of the two men and two women chosen to crew the expedition – after nine years of rigorous training. After the first round of selection concludes in December, the thousands of applicants will be cut to a shortlist of 40, Welt newspaper reported. Of the applicants, 43 Germans are currently featured on Mars One’s website all hoping to make the trip.

And 45-year-old Stephan Günther might be Germany's best hope to join the expedition.

"I'm kind of a space maniac," he said in his application video. "I've actually been living and breathing space as long as I can remember.”

Günther traces his obsession with space travel back to the television coverage of the 1969 Apollo 11 moon landing: "I was one-year-old," he explained. “My mother wasn't able to pull me away from the TV."

If selected, he would be leaving behind his family – a wife as well as two children from a previous marriage – but he could not turn down the opportunity, Günther told the Welt.

"A chance like this only comes once in a lifetime," he said.

The project's €7 billion price tag is largely to be funded by running the mission as an "international media event," with audiences having a hand in selecting participants out of a handful of finalists and watching ongoing footage from the planet after the landing, reality TV style.

Big Brother creator Paul Römer is enthusiastic about the mission's potential for entertainment, calling it "reality meets talent show with no ending and the whole world watching."

But aspiring German Mars settlers were keen to show enthusiasm for the project as a benefit to humanity, trying to sway judges with their dedication in the face of having to leave family and friends behind forever.

Tim, a 20-year-old computer science student, hoped his belief in the mission would impress. "I think it's necessary for humanity to go [to Mars]," he said.

"We always have to evolve and be successful somehow, going to Mars is just the next step – and I want to be a part of it," he added.

Forty-year-old Dieter-Georg agreed. "I think it's important for humanity and our life on this planet that we also travel to other planets and spread out in the universe," he said.

He added it would help "to keep expanding our knowledge about the universe."

German-born software engineer and former Buddhist monk Lennart went further. "Humans really need to get off this planet as soon as possible,” he said.

"You shouldn't put all your eggs in one basket," he added. “Our civilization and future generations truly depend on us becoming independent of planet Earth."

Mars One has been noted for inviting budding astronauts of all ages and stripes, outside of the usual cadre of military pilots and field researchers.

"I'll be the perfect age," he added. "I will only need feeding for at most another 20 years."

Pioneering spirit and a taste for adventure seem to be highly valued where this project is concerned.

Applicants should be motivated by "the drive to explore and discover", Mars One says, which it calls "a natural human attribute."

Project co-founder Bas Lansdorp told press last May: "Human exploration of Mars will be the most exciting adventure mankind has embarked upon in decades."

"The first explorers to go to Mars will step straight into the history books," he added.

And parallels with daring explorers of old certainly resonate with pilot and game maker Günther.

In an interview with the Welt he compared himself to 15th-century Italian explorer Christopher Columbus. Asked about his family's reactions to his decision to leave them to go to Mars, Günther replied that when Columbus set off into the unknown, people called him crazy too.

"But if he hadn't sailed out, he never would have discovered America," he said.