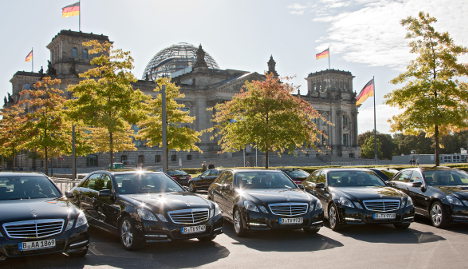 Green Party deputy parliamentary leader Bärbel Höhn said: “We should offer more fuel efficient cars and bicycles as well. That would reduce costs and possibly get people to reconsider their views."

The call was sparked after it emerged that the company which provides drivers and vehicles to the German parliament, Rocvin, is threatened with bankruptcy, Spiegel reported on Wednesday.

The far-left party, meanwhile, said it was concerned about the working conditions of the drivers. Die Linke’s deputy parliamentary leader Sabine Zimmermann said the parliament had a responsibility to Rocvin employees.

Spiegel reported that the chances of finding a new contractor if Rocvin did go bankrupt were low.

Only two firms applied for the last contract, one of whom was Deutsche Bahn, which withdrew its bid.

But Berlin's taxi drivers would benefit if politicians were no longer whisked around in luxury cars.