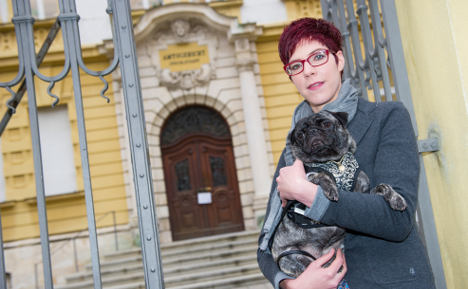 Barking could be heard inside the courtroom from the corridor outside on Monday as the pug's owner and breeder battled over the cause of the dog's arthrosis, a painful degenerative disease affecting the spinal column.

"I want justice for Emma," pug owner Aurelia Hofmann later told reporters outside the small claims court in the southern German city of Ingolstadt, wrote the Welt newspaper on Tuesday.

Hofmann, 26, told the judge she bought her darling pug from the breeder two years ago after falling "head over heels in love" with it on first sight, wrote the paper.

All appeared fine until Emma was fully grown and was diagnosed the crippling disease, which Hofmann says is only just manageable for the dog with the help of painkillers and acupuncture.

Convinced the condition is the result of a genetic defect, the nurse from Nuremberg is demanding half the price she paid, €700, back from the breeder.

After several failed attempts to get compensation, Hofmann decided to sue. The unnamed breeder, however, claims she had kept all legal requirements and that her puppies are always declared healthy by a vet before sale.

But Hofmann's bite is clearly as fierce as her bark. Despite long and tiresome negotiations, the owner rejected the judge's suggested settlement of €500.

Whether the case goes to a second hearing now rests on whether the dog's disease is proved genetic or could have been brought on by overexertion, such as long and strenuous walks in early life, as the breeder maintains.