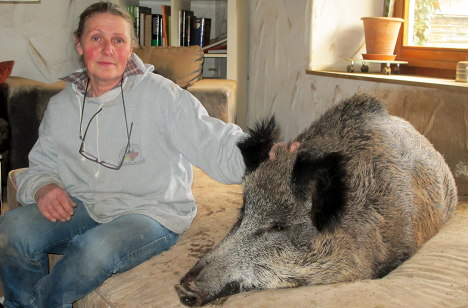 Gaby Gossett has had Lexa the wild boar around the house since she was brought to her as a piglet by a hunter. Injured, the tiny boar fitted in one hand and was not expected to live. “It looked like she wouldn't make it,” said the animal naturopath.

But Gossett, who lives in rural Saarland, in western Germany, nursed baby Lexa back to health. Too tame to be put back in the wild, the boar, weighing 120 kg, lived in her owner's living room on a mattress and could trot around the house and surrounding gardens freely.

On Monday, Lexa was shot and killed by a hunter in the forest. “I'm desperately unhappy,” said Gosset, who explained that together with three dogs, she and the boar had “been a pack, and a family.”

“I was the top dog, or top pig,” she said, adding that Lexa had never shown any aggression towards her. “She tested the boundaries twice but when she saw I was the boss, it was fine,” said Gossett.

Forester Michael Gillert believes that whichever hunter shot Lexa did not know she was a pet. Wild boars are not normal house animals, as Gossett knew well. “You have to be ready to compromise,” she said.

Lexa was not a particularly clean boar and Gossett admitted having to sacrifice a squeaky clean house. But it was worth it. “She trusted me and gave a lot back,” said the 56-year-old, who would take her rabble of animals on walks through the forest three times a day.

Leading the pack around the 500-resident village and surrounding woods, Lexa would trot in front – clearly the boss of Gossett's Irish Wolf Hound and two Sheepdogs.

Sometimes she would go off by herself at night as well and Gossett said only last week that she was worried Lexa would not come back one night.