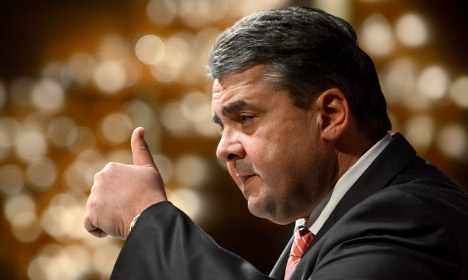 Packed to the rafters, a hall full of members in the Social Democratic Party (SPD) stronghold of Baunatal, near the central city of Kassel, heard him tout his hard-fought deal this week to enter government with the conservatives.

It was just one of more than 30 regional gatherings SPD leaders are addressing in the 12 days before the 470,000 rank-and-file members take the unprecedented step of voting on whether the bruised centre-left party should join the coalition.

"The coalition agreement will considerably improve people's lives for the next four years," Gabriel, 54, told the meeting of the 150-year-old, traditionally blue-collar party in this town of around 28,000 residents.

He won several key SPD demands from Merkel in weeks of wrangling over the terms of the coalition, including Germany's first national minimum wage and pension improvements.

Now the deal, clinched in down-to-the-wire negotiations before dawn on November 27th, faces the party base via a postal ballot starting on Friday.

And – despite memories still fresh in some members' minds of a 2005-09 grand coalition with Merkel when the SPD got its fingers burned – experts now believe a 'yes' vote is likely when the outcome is known, probably on December 14th.

"The Social Democratic Party must seize the opportunity to improve people's lives a bit," insisted Gabriel.

"Naturally, Mrs Merkel hasn't transformed into a Social Democrat and we didn't succeed in getting all of our manifesto into the [coalition] deal," he acknowledged, but trumpeted the concessions SPD negotiators had wrested from the conservatives.

Under the coalition pact, Germany's top political parties agreed on an €8.50 hourly minimum wage, to drop the retirement age to 63 for those who have paid into the state system for 45 years and the easing of rules on dual nationality.

Merkel romped to a third term in September elections with 41.5 percent of the vote but fell just short of an outright majority, forcing her to court her main campaign rivals to govern Europe's top economy.

But the prospect failed to ignite SPD enthusiasm, with members still disillusioned by its previous experience of governing in Merkel's shadow and the wake of painful deep-seated labour market reforms instigated by the SPD's 1998-2005 chancellor Gerhard Schröder.

Political scientist Frank Decker, from Bonn University, said, given the SPD's showing of just 25.7 percent in the September 22nd polls, the party had negotiated "well" in the protracted haggling with Merkel.

"A slight majority in favour of 'yes' is forming," he said, adding that he did not foresee a problem in reaching the quorum of 20 percent.

It is an overall view shared by his colleague from Düsseldorf University Ulrich von Alemann, who said: "They talked with the conservatives as equals."

According to several polls, a majority of SPD voters want to see the party membership approve joining the grand coalition.

If all goes to plan, Merkel, now officially the head of a caretaker government, is due to be sworn in for a third term as chancellor on December 17th.

The SPD is expected to have six ministry jobs in the new cabinet, to the conservatives' nine. But to ensure the party base focuses solely on policy when they cast their ballots, ministries have yet to be publicly allocated.

Many rank-and-file members remain conflicted but are now leaning towards toeing the party line, fearing that a rejection of the hard-fought deal would seriously hurt the SPD.

"I am fundamentally against Mrs Merkel," said retired social worker Reinhold Debus, who came to listen to Gabriel in Baunatal. "But reason is pushing me to vote 'yes' because, if not, there will be new elections and this wouldn't be good."