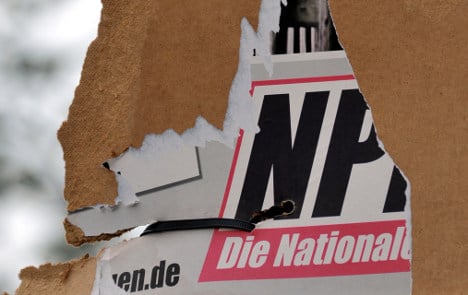 If I ruled the world, neo-Nazis would be taken off the streets and put in camps out in the countryside. This would make life more pleasant for everyone else, and also be for their own good.

The camps would not be the kind they might favour for people they don't like, but nice ones, with gardening and cooking lessons and adventure-based counselling.

There they'd be encouraged to stop feeling so angry with the world, and helped to realize that skin colour and country of origin are not half as important as they previously thought. Lessons would include statistics so they could understand crime figures, and evolution, so they'd get a hang of the greater scheme of things.

But until my vision becomes reality, should Germany just ban their sorry arses?

The trouble is that even the Constitutional Court cannot actually ban the neo-Nazis themselves, just their horrible party.

'Ban it to remove fig-leaf of legitimacy'

There is a strong line of argument, as made very effectively by Professor Hajo Funke in The Local last year, that the party should be banned to give the police an unmistakable nudge to crack down on far-right violence and intimidation.

The continuing legality of the party gave fascists on the street a fig-leaf with which to cover their ugly ideology, he suggested. "It feeds them ideologically and gives them a sense of legitimacy," he said.

But I'm sure none of the people who beat up foreigners and leftists, and threaten those who stand up for decency on German streets, actually care much how much legality their party may or may not have.

One of the chief bugbears arising from its continued legality was that due to the party's little slice of electoral support, the NPD was getting state funding. But thanks to the inability of party leaders to manage finances and pay fines, this has now been stopped.

If the Constitutional Court bans the NPD it may disrupt the neo-Nazi network a little, but it will make no difference to the towns and villages where drunk skinheads beat up foreigners and scare people into saying nothing when they smash the kebab shop window again.

A ban is unlikely to leave a dent in the fervour with which local groups try to prevent asylum seekers being granted leave to stay in their area – they will simply portray themselves as concerned local citizens. People of similar thinking will always find each other, and we cannot and should not seek to prevent that.

Zero tolerance of violence and intimidation

What Germany needs more than a ban on the NPD is a real root-and-branch reform of the police and security services. The violence and intimidation that neo-Nazis inflict on people around them should no longer be tolerated as it sadly is across the country.

A zero-tolerance policy towards threats of violence and targeted vandalism – strictly implemented by well-funded, supported and most importantly motivated police would be a crucial step forward in tackling the problem of the far Right in Germany.

It is the fact that the drip-drip of fascist intimidation often goes unanswered which encourages and empowers those neo-Nazis who decide to attack people – not whether the NPD is legal or not.

Their strongest backer is not the NPD, what supports them in their drunken rage is the institutional racism and indifference to the plight of asylum seekers or foreigners. There are already laws against incitement and hate speech – but they need to be enforced properly.

If every incidence of racist or fascist aggression, graffiti, vandalism and physical violence was taken seriously and stamped on by the authorities, it would strengthen the resolve of people who stand up for the person being bullied on the train or in the street. They would have the full, active backing of the law rather than a rather shaky sense that such a thing is probably not allowed.

Germany does have a strong sense of reason and democracy and fairness. It's people are not fascists. But there is widespread racism, and this needs to be actively tackled at all levels of society – with the police and security services made a priority.

Then Germany could really claim to have a democratic system that extends to the streets. One that is strong and stable enough to handle having a legal fascist party. Let them have their little party, but ensure that they are restricted to talking their rubbish rather than trying to enforce it.

If sticks and stones are not allowed to break bones, and words are no longer permitted to intimidate, these horrible, ignorant ideas will be robbed of their power to harm.

READ MORE: 'Only a neo-Nazi ban will force the police to act'