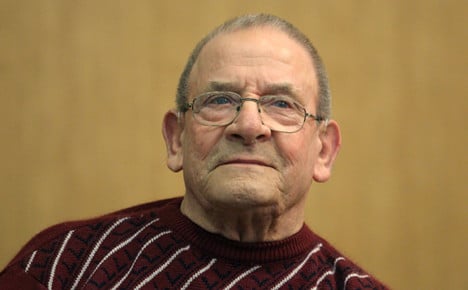 Although the cause of death has not been confirmed, Boere had suffered from heart problems and was wheelchair-bound when he entered prison in December 2011. He was convicted the previous year.

He had admitted to shooting in 1944 the pharmacist Fritz Bicknese, as well as bicycle shop owner Teunis de Groot and a third man, Frans-Willem Kusters.

Boere had argued that as a member of an SS commando unit tasked with killing suspected resistance members, he risked being sent to a concentration camp if he refused.

He spent six decades one step ahead of the law after escaping from a prisoner-of-war camp in 1947 and returning to his birthplace in Germany.

Boere, whose father was Dutch and who grew up in the Netherlands, was sentenced to death in Amsterdam in absentia in 1949. The sentence was late commuted to life imprisonment.

Afterwards, he remained a free man – working as a coal miner in Germany until 1976 – as Germany refused to extradite him in the 1980s, saying it was unable to determine whether he was German or stateless.

Germany as a rule does not extradite its citizens to stand trial in other countries.

More than 70 years after the Berlin Zoo forced Jewish shareholders out of its ranks, the institution is trying to come clean about its own dark chapter during the Nazi era.

A Berlin historian is combing through thousands of names to identify members made to sell their shares back to the zoo at a loss under the Third Reich, and has begun tracking down their descendants ahead of publishing her findings.

"Jews were very important for the zoo," said historian Monika Schmidt, who estimates up to a quarter of the zoo's 4,000 shareholders in the 1930s were Jewish.

"But they were pushed out step by step by the zoo itself, before the Nazi state asked any institution to do those things," Schmidt said.

Zoo shareholders did not receive dividends, but their families enjoyed free entry and the prestige of supporting an important social institution. Their exclusion is just one example of how Jews were pushed out of public life in 1930s Germany and stripped of their assets.

"Today, the zoo is just a zoo, with animals to watch," said Schmidt, with the Center for Research on Antisemitism in Berlin.

In 1938, Jewish shareholders were forced to sell their shares back to the zoo for less than their value, according to Schmidt.

The zoo, in turn, re-sold the stocks to "Aryanise" the institution. Now, Schmidt is poring over names in a post-war recreation of a shareholders' log, and will compare them to residence and restitution records in an attempt to identify former Jewish patrons.

Commissioned by the zoo, she plans to publish the names and biographies in a book next year. The zoo's actions pale in comparison to other atrocities committed in Hitler's Germany, but historians say there is value in documenting them.
In 2011, the zoo installed a commemorative plaque for Jewish shareholders. Now, they want to do more.

"It is important to make the decision to continue to engage with this topic, to not forget what is possible," said zoo spokeswoman Claudia Bienek, noting the particular importance of documenting the lives of former Jewish shareholders in a book.

Bienek said reparation payments are not being considered.