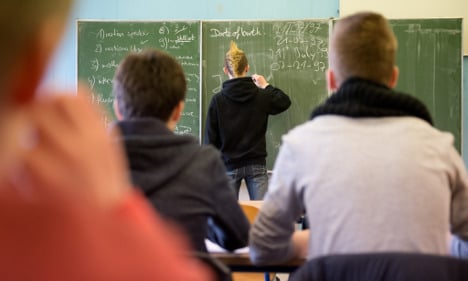 The Pisa international school test results released on Tuesday showed 15-year-olds in Germany were slightly above average in the global playing field when it came to maths, reading and comprehension and science.

In maths German teens scored an average of 514 points, one up on their score in 2009. This put them 20 points ahead of the global average, which is considered about half a school year's advantage. The situation in science was around the same, although the German advantage was only about half that.

Germany came 16th in the test, behind regions such as Shanghai which did best, Singapore and Hong Kong, which were next. Closer to home, Switzerland, the Netherlands, Estonia, Finland, Poland and Belgium all did better than Germany. But the rest of Europe trailed behind, as did the USA.

Pisais the biggest global school comparison test – it's conducted every three years by the Organisation for Economic Cooperation and Development (OECD). Carried out in 2000, the first one produced the 'Pisa shock' in Germany as its scores were surprisingly low. Reforms were rapidly enacted and the 16 federal states streamlined their teaching standards.

These latest results show that German boys were nearly half a year ahead of their female peers in maths, an increase on the gap in previous years. Girls were generally more negative about maths and less confident in their abilities – and less interested.

The connection between education and social privilege has weakened somewhat, the report suggests, but teenagers from better-off families remained nearly a year and a half ahead of those from poor backgrounds.

Those who have improved the most over the last 12 months were those who had previously been at the bottom of the pile, said Manfred Prenzel, an education researcher. He said that this year 17.7 percent of those tested in maths failed to reach Level 2 – whereas back in 2000 that figure was 22 percent. The 17 percent of those tested who performed best had remained constant over the same period.

In Germany, 5,000 teenagers were tested as part of the huge global study which tested 510,00 school pupils in 65 countries and regions.

READ MORE: Every sixth German as literate as a ten-year-old