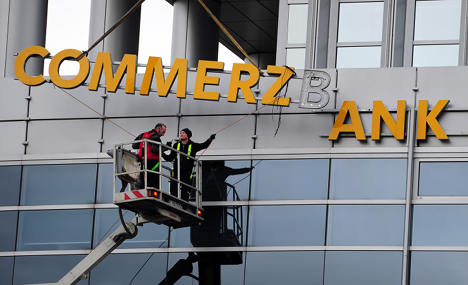 Hundreds of German police officers on Tuesday raided 40 branches of Commerzbank, the country's second biggest bank, over suspected tax fraud by hundreds of clients, the bank and prosecutors said.

Commerzbank is not a suspect in the affair, with business daily Handelsblatt reporting that the probe centred on more than 200 wealthy clients suspected of hiding income in life insurance policies provided by an Ireland-based division of an Italian financial institution.

About 270 officers took part in the coordinated raids, the prosecutors' office in the city of Bochum said.

A Commerzbank spokesman confirmed that "as part of an investigation against individuals in connection with alleged abetting tax evasion, business premises of Commerzbank were investigated today."

The searches in the bank's Frankfurt headquarters and branches across the country were aimed at "several employees of another financial services provider," the spokesman added.

The Bochum prosecutors' office said it suspected that employees of a foreign financial institution, which they declined to name, had aided and abetted tax fraud since 2006 in more than 200 cases.

Commerzbank, as manager of the accounts, was being treated as a witness, according to the Handelsblatt, which said that the total amount of untaxed money involved came to hundreds of millions of euros.