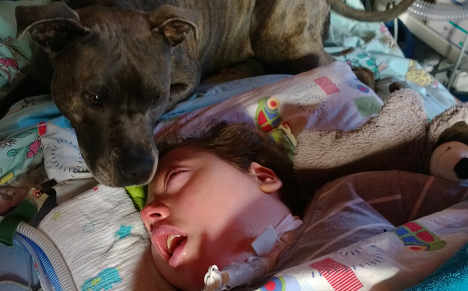 Loyal pet Tascha has visited 10-year-old Dylan, who has been in a vegetative state since birth, regularly for six years.

Her presence seems to have a calming effect on Dylan, who is kept alive by life support machines, father Eckhard Gerzmehle told the BZ newspaper.

Her family bought her when they were living in Berlin but soon moved to Brandenburg where the breed is considered dangerous and not allowed.

Authorities threatened to take Tascha away, which the family said would be devastating for Dylan. The dog had bitten another dog while out on a walk.

But after the BZ covered the story, a social media campaign built up momentum thanks to fireman Jürgen Töpfer who set up a Facebook group which attracted more than 100,000 likes.

Brandenburg authorities agreed to meet the family to talk about how they might be able to keep the dog.

To get around the fact that Tascha's breed is not allowed to be kept as a pet in Brandenburg, authorities have allowed the family to de-register her in that state and re-register her in Berlin, where Staffordshire Terriers are allowed.

She is now in the process of undergoing training as a therapy and companion dog for disabled people. She has, the BZ said, already had three lessons and is doing well.

“We are so happy and thankful, also for the support,” said Dylan's parents after the meeting, referring to the hundreds of thousands of people who showed solidarity with them online.