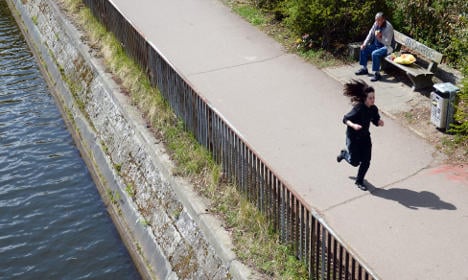 The Landwehr canal in Berlin. Try to stay out of the water. Photo: DPA

Alexander Vogel was walking along the Landwehr canal in the early hours of Sunday when he heard cries from nearby. "It was such a wretched noise," the 38-year-old told the Tagesspiegel newspaper.

At first he said he scanned the bushes thinking the noise was coming from someone who had been mugged and injured. But then he realised the cries from the – very cold – water and saw a man floundering in the canal.

"He was pretty far from the bank, and kept sinking under the surface," said Vogel.

"He managed to get back [to the side] but could not get up onto the bank on his own."

The water level is at least 1.5 metres below the side at that point, the Tagesspiegel said.

So Vogel unwound his over-long, hipster scarf, lay on the ground and threw the knitted accessory to the floundering American.

Two other young men had come along to help. "The other two lads held onto me, but despite that I was sliding," said Vogel. "And the other guy couldn't at first climb up even with the help of the scarf. He kept slipping."

But by the time fire fighters and police arrived, the American, who was just 22, had managed to pull himself up on the scarf. He was taken to hospital for treatment for hypothermia.