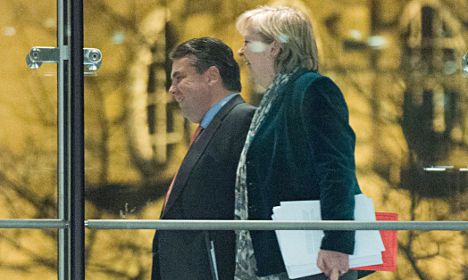 But the accord must still be endorsed by his party's membership who vote on December 14th. A poll in the Sunday's Welt am Sonntag newspaper suggested 78 percent of party members were intending to back the deal.

At the Social Democratic Party's (SPD) instigation, possible portfolios have so far not been announced to allow the more than 470,000-strong rank-and-file, who will begin voting this week, to focus on policy.

But when asked in an interview with the Bild am Sonntag whether he could promise that half of the ministries would go to women, Gabriel, who is expected to become Merkel's vice-chancellor, replied: "Yes."

He added that the SPD needed to become more female although the 150-year-old party had already taken strides in that direction.

"We have now for the first time in the history of the SPD more women than men in the top party leadership," he said, adding however: "The SPD must become still more female."

The SPD is expected to get six ministries in the new government.

The party pushed through several of its key demands in the coalition deal, including the creation of a minimum wage and a women's quota for the supervisory boards of listed companies.

Nevertheless the outcome of the SPD members' vote, expected to be known on December 14th or 15th, is far from certain because many members reject the notion of their traditionally blue-collar party again governing in the shadow of Merkel, as it last did in 2005-2009.

After that uneasy political marriage, the SPD suffered two humiliating electoral defeats in a row, winning less than 26 percent against the conservatives' nearly 42 percent in the election on September 22nd.

SPD general secretary Andrea Nahles told the Welt am Sonntag newspaper that she was "optimistic" the party base would approve the coalition and had "a good feeling" it would win clear majority backing.

But she acknowledged scepticism remained among some members.

Gabriel, who may also head a ministry, told the Bild newspaper he planned to continue picking up his two-year-old daughter from nursery, saying he believed it had to be possible as a politician to also have a family.

"Since I will frequently be away at the weekend I will also still fetch my daughter regularly from nursery when my wife is working," he said.