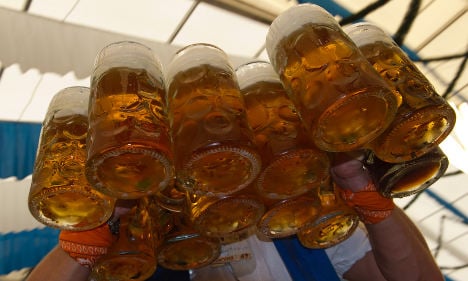 They feel visitors to the world’s biggest beer festival, which returns to Munich this weekend, are being shortchanged by venues underpouring the famously frothy beer, the Münchner Merkur newspaper said. The liquid failed to reach the measuring line in four out of five cases last year, authorities said.

The one-litre glasses known as Steins or Mass contain far too much head, meaning that some drinkers who pay almost €10 for a beer are losing €2 of liquid per drink, city authorities said.

The worst offender at the Oktoberfest in 2012 was named as the Käfer’s Wiesn-Schänke venue, where drinkers only received 0.8l of beer for every one litre Stein ordered. The tent belonging to the Löwenbräu brewery was most generous with 0.94l of beer. Drinkers only lost 52 cents to head, the newspaper reported

Wilfried Blume-Beyerle, head of Munich’s Kreisverwaltungsreferat (KVR) which is responsible for order in the city, warned brewers and those running the huge tents that they would be pursued “energetically” and face sanctions if they cheated customers with a lack of beer.

Only one in five steins served in 2012 had the correct amount of beer, the KVR said at a press conference on Monday. “A full mass was the exception,” authorities said.

Although the problem has existed for years Blume-Beyerle told reporters his team would clamp down with renewed vigour punishing the tent’s landlord as well as the waiter, the Münchner Merkur said.

Under the rules the barman or waiter will initially be responsible for shortchanging customers, and given a verbal warning. They will then receive a written warning.