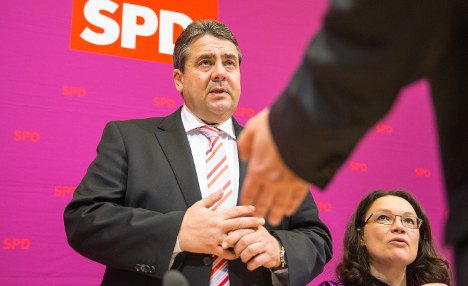 Despite his party's humiliation in September's election, with just 26 percent of the vote to Merkel’s 42 percent, Gabriel has played a weak hand well and pushed a raft of flagship Social Democrat (SPD) policies into the coalition agreement.

They include making it easier to get dual citizenship, a nationwide minimum wage, pension reform and increased investment in schools, some of which had been explicitly opposed by the conservatives.

He is banking on this being enough honey to persuade the Social Democrat membership to vote to join the government as junior coalition partners on December 14th.

Gabriel would then become vice-chancellor and possibly head a 'super ministry' which would include energy and economic ministries.

He could then be a challenge to Finance Minister Wolfgang Schäuble who is widely expected to retain his position, as the most powerful man in Germany. But despite four years as environment minister in the last grand coalition, Gabriel is not well-known outside Germany.

The 54-year-old was born in Goslar, Lower Saxony, to parents who separated when he was just three. He lived first with his father and then his mother, joining the Social Democrats as a teenager, and the ÖTV public service trade union as a young man.

After two years in the army, he went on to study German, politics and sociology at the University of Göttingen while also getting his teaching qualification. He worked as a teacher at a grammar school and also taught at Volkshochschulen, adult education centres.

In 2005 he was elected as a national MP and served as environment minister during the last “grand coalition” government between 2005 and 2009.

He has a daughter in her 20s from his first marriage, and last year became a father again at the age of 52, with his second wife who is a dentist.

The Bild newspaper described Gabriel as a strong public speaker who helped to ensure environmental issues were on the political agenda.

In March he wrote in the UK’s Guardian newspaper in favour of banking reforms and social equality.

“Changes to the financial sector must not be limited to a few cosmetic corrections. Instead there should be fundamental reform, restoring the sector to its proper role of servicing the productive economy,” he said.

In an apparent dig at the UK government and Prime Minister David Cameron he wrote: “Those who confine themselves to getting the best possible deal for themselves out of the EU and are not ready to invest in the European community weaken the EU overall and thus, in the long-term, harm their own interests.”

Gabriel is now staking his political future on the Social Democratic Party members approving the coalition agreement he drew up with Merkel's conservative bloc.

Without their support, his career within the party would be all but finished, and Germany could be heading for another election.

READ MORE: Reasons why the coalition agreement matters to non-Germans