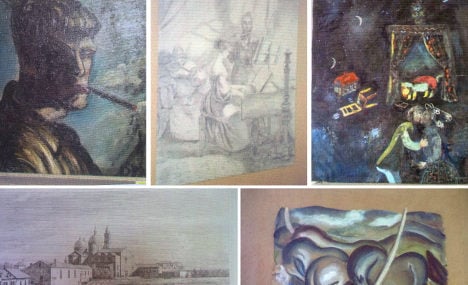 The works were found hidden in a Munich flat. Photo: DPA

The chief prosecutor in Augsburg, where a task force is leading an investigation into Cornelius Gurlitt, the son of an art dealer who worked for the Nazis, said around 300 of the 1,400 works found in a Gurlitt’s Munich flat could be returned to him.

He acknowledged on Tuesday that many of the hundreds of works confiscated from his home in February 2012 clearly belonged to him outright.

Prosecutor Reinhard Nemetz said he had asked a task force working on the spectacular find to identify such paintings "as soon as possible".

But on Wednesday President of the Central Council of Jews in Germany Dieter Graumann said: “After the whole thing was dealt with almost conspiratorially for 18 months, the hasty reaction of a blanket return [of the paintings] is surely the wrong way to go about things," the Süddeutsche newspaper reported.

He added that the case had a "moral and historical dimension".

Meanwhile the head of the World Jewish Congress told AFP that Germany's credibility was on the line in its handling of the hoard of priceless artworks. He said the country must take bold steps to give back property to its rightful owners.

Saying that the more than 1,400 paintings, sketches and prints by the likes of Picasso, Matisse and Chagall hidden in a Munich flat may just be the "tip of the iceberg", WJC President Ronald S. Lauder said Germany has a moral obligation to speed up the return of Nazi-looted art.

He called on the country to take two immediate steps: eliminating a 30-year statute of limitations on reclaiming stolen property and forming a commission that would help process claims and examine public collections for stolen works.

"The principal obstacle to the recovery of Holocaust-looted art that is inprivate hands is the statute of limitations because it prevents judicial inquiry and recovery," he said in a telephone interview from New York.

"The German government should address the problem because the Holocaust is unique and the statute of limitations was never intended to deal with massive wartime looting perpetrated in the course of genocide."

CLICK HERE to see some of the confiscated paintings Lauder said he had proposed to the German government the creation of acommission, on which he was willing to serve, which would help process claims by individuals and museums who lost art during the Nazi period.

"They should have this commission that looks at all the requests, has all the records and is able to sort it out, decide which (claims) are real, which are not real," Lauder said.

"The fact is we can give a great deal of help to them. We are experts inthe field and we understand what can be done and we've seen what other countries have done successfully."

He warned that rightful owners of paintings in the Munich hoard could find themselves entangled in protracted, expensive legal battles with no guarantee of getting their property back.

"It'll take years in the courts and it'll be a mess," he said. "This may be the tip of the iceberg, there may be hundreds if not thousands of other pictures in Germany that we don't know about, that some day will come to light. This commission can do a great deal of work toward that."

Lauder said he was disappointed Germany had not been more aggressive in the identification and restitution of stolen art.

"Germany has done so much to make things right (since the Nazi period) and this is something that of all the things we've done it's the easiest because of the fact we have records — this is not dealing with dead human beings, this is dealing with art," he said.

"It's incongruous because they've done so much – why on something like this which is very straightforward, they stop. I'm scratching my head to understand."

He criticized the fact that although German authorities seized the works at the Munich flat of Cornelius Gurlitt in February 2012, they had remained silent until Focus magazine made the find public this month.

"They initially reported it as a tax avoidance scheme and not for what it really is – it really is someone having stolen Holocaust art and basically saying to the German government, 'Haha, I have it, you can't touch it'," he said.

"Every work belongs to either a museum or an individual who had had that work on his wall and was taken out by the Nazis. So every one is important. They may not all be Picassos and Matisses but in their own right they're important, they're important to somebody."

Gurlitt, the son of a powerful art dealer who acquired and sold countless precious works for the Nazis, gave a defiant interview to this week's Der Spiegel magazine in which he vowed not to give up his works without a fight.

The WJC, which Lauder has chaired since 2007, represents 100 Jewish communities outside Israel.

The billionaire philanthropist and art collector, son of the cosmetics mogul Estee Lauder, set up a foundation in 1987 with the goal of rebuilding Jewish communities in central and eastern Europe devastated in World War II.

READ MORE: Who is the recluse behind the Nazi art haul?