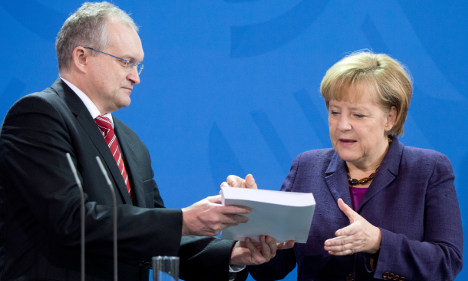 While much of the rest of Europe puts up with austerity measures, Chancellor Angela Merkel and her new coalition allies, the Social Democrats, agreed to form a government on Wednesday which will increase spending by an estimated €23 billion over the next four years.

The plans include reducing retirement age in some cases, improving pension payments for parents and increasing investment in education and infrastructure.

Merkel insisted the money could be found without raising taxes or increasing government debt, but economists are sceptical.

Chairman of the German Council of Economic Experts, Christoph Schmidt, said the plans were not affordable in the long term. “The planned additional spending from 2015 might be able to be financed without new debts and taxes until 2017, but not beyond that,” he told the Welt newspaper.

He said politicians were currently benefiting from low interest rates but that this would not always be the case.

He said: “The biggest problem is the combination of stricter labour market regulation, lowering the retirement age and the introduction of new pension benefits. This increases social security contributions and lowers employment when what we really need is more jobs,” the Süddeutsche newspaper reported.

But Finance Minister Wolfgang Schäuble, who is expected to remain in his post in the next government, defended the spending. “We’ve calculated it properly,” he said on German radio on Thursday.