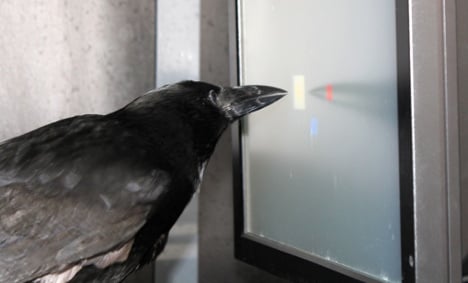 One of the Tübingen crows solves yet another problem. Photo: Felix Moll/Universität Tübingen

Birds’ brains are missing many characteristics of mammalian brains – but some such as carrion crows can solve very testing intelligent tasks – an ability scientists from the University of Tübingen in Baden Württemberg, used for their research.

Lena Veit and Andreas Nieder published a paper on their work in this month's Nature Communications science journal. They trained carrion crows to solve problems and looked at their brains as they undertook the work.

They got a snack as a reward when they got it right.

After a short training phase, the birds were getting it right practically all the time. "This demands high concentration and a level of mental flexibility which certainly not all kinds of animals can manage and which is a challenge even for people," the researchers wrote in their paper.

They saw that different nerve networks were active for the different tasks, depending on whether the crows were indicating the picture they had already seen or the new one. This was amazingly similar to the way that primate brains work, the researchers said.

They said the work suggested that an area of the bird brain called the nidopallium caudolateral (NCL) was carrying out abstract thought processes in the same way as primate prefontal cortexes do.

Their work emphasizes that animals have evolved intelligence via different routes, the researchers said.