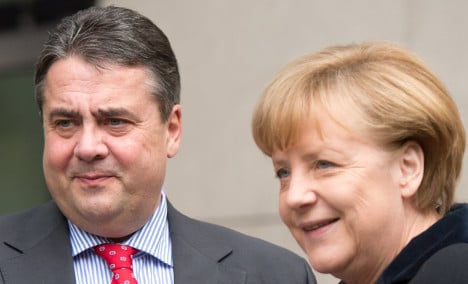 1) No tax rises, but spending up

Merkel stayed firm on her pledge to not raise taxes, but the coalition agreement commits to increase spending by €23 billion between now and 2017. It includes a €5 billion investment in the country’s infrastructure and an extra €5 billion on education. Changes to the state pension will also cost billions, making future tax rises more likely.

At the SPD's demand, workers who have paid pension contributions for 45 years will be able to retire from the age of 63, whereas currently the rules foresee the gradual introduction of 67 as the retirement age. Merkel's conservatives won their demand for an improvement in pensions for mothers.

The next government will look at charging foreigners to use Germany’s autobahn. The idea would get around European Union equality rules by charging everyone the same – but then reducing German road tax.

Foreigners would therefore pay where before it was free, while Germans would not experience an increased overall cost.

Horst Seehofer, leader of Merkel’s Bavarian allies, the CSU, made the charge a condition for the his party's involvement in any future government.

A law could be introduced next year, but the coalition agreement does not guarantee it will be introduced. Seehofer is isolated on the issue as both Merkel and the Social Democrats are against it.

This was a victory for the SPD whose election manifesto had included a pledge to make it easier for foreigners to gain dual citizenship.

People born in Germany to immigrant families have both their family and German citizenship – but must chose one or the other before they reach 23 years old. This condition will be scrapped to allow thousands of foreigners to have both German and Turkish passports, for example.

There was another clear win for the SPD over pay, with the agreement setting a national minimum wage at €8.50 an hour, from 2015. Certain sectors, such as farm work, will be able to continue, for a transitionary two year-period, to apply a lower hourly wage but by January 1st, 2017 at the latest, the €8.50 minimum will apply to everyone.

The level of the minimum wage will be regularly reviewed by a commission made up of employers and trade unions.

The move is expected to enable about one million working poor to no longer rely on supplementing their income through benefits. According to the DIW research institute, 5.6 million workers currently earn less than €8.50 an hour.

The parties also agreed to introduce a quota of 30 percent women recruited to sit on boards of listed companies from 2016.

5) Future of the European Union

Merkel hopes to slim down EU bureaucracy and, together with UK Prime Minister David Cameron, would like to reduce the number of European commissioners and give member states more control over who can access benefits in their respective countries.

The agreement calls for a "stringent and efficient" set of EU commissioners. According to think-tank Open Europe this is “possibly a hint towards reducing the number of commissioners and focusing them on policy areas rather than allowing one for each member.”

The deal also includes Germany's opposition to any mutualisation of eurozone countries' debt in the form of eurobonds for example and stresses the principle of solidarity and responsibility.

The political parties agreed to provide new momentum to negotiations on the introduction in Europe of a financial transactions tax.

READ MORE: Seven reasons why the elections matter to non-Germans